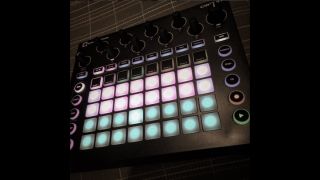 Just over a week ago, Novation teased us with its 'start something' campaign, which kicked off a lot of speculation as to what the company was planning to reveal.

However, it looks like someone (none other than producer Mike WiLL Made-It) has 'started something' just a little too early. Ahead of the 1 October launch, a picture has appeared on his Instagram feed of what looks like a new instrument called Circuit.

Judging from the image, Circuit takes design cues from Novation's Launchpad products. However, it appears that this is more than just an Ableton Live controller.

Take a closer look and you will notice the words Synth and Drum on some of the buttons, suggesting that this is a self-contained product.

Keep your eyes peeled, as we'll have more news on MusicRadar for you tomorrow.