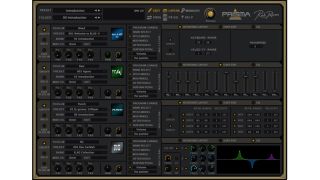 NAMM 2016: Renowned Dutch synth developer Rob Papen has announced a new utility plugin that brings together his (mostly) superlative range of instruments - including Blue-II, Predator, Blade and Raw - in a rack-style host environment.

It's called Prisma, and it enables you to combine mulitple synths for larger-than-life sounds, then save the whole lot out as a Prisma preset. Using it is a simple matter of loading a synth into each of its four slots, then processing and mixing their outputs to end up with a, ahem, "single 'prismatic' sound source". Keyboard splits can be created for intricate performance setups, and a three-band EQ (plus low- and high-pass filters) at the end of each slot/channel gives a good degree of signal-sculpting, while four built-in send effects extend Prisma's sound design potential beyond the capabilities of the hosted instruments.

Papen's Punch drum machine is catered to as well, with Prisma letting you trigger its built-in grooves, as well as - we presume - its individual percussion sounds, via the keyboard.

It's important to note that unlike most other 'hosting' plugins of this kind, Prisma only works with Rob Papen's own synths rather than third-party ones. Back on the upside, however, Prisma is free for anyone with a registered Papen instrument and comes with a library of presets, many stacking multiple instances of the same instrument.

Prisma is expected to be available at the end of March. Find out more at the Rob Papen website.