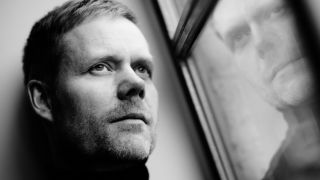 Max Richter grew up in sleepy rural Bedfordshire, which may have played a part in his contemplative approach to music. His lengthy career has been acclaimed for successful experiments in neo-classical composition.

Alongside his post-minimalist approach, Richter adopts an open-minded attitude to electronic music, both through his own experiments and past collaborations with the likes of The Future Sound of London and Roni Size.

However, this month, the composer releases his seventh studio album 'Sleep'. At eight hours length, this landmark recording pushes Richter to the limit of his compositional ability, studiously delving into the neuro-scientific processes that inhabit the listener's natural 'dream state'.

Perhaps even more daunting than the recording process itself, Richter is planning an all-night performance in Berlin - with beds supplied.

When did the electronic aspect of music composition take hold in you?

"I had piano lessons and music classes, but when I was about 12 or 13 I heard a BBC Documentary that used the opening to Kraftwerk's Autobahn.

"I went nuts for that sound but couldn't figure out what it was. Eventually, I realised there was an instrument called a synthesizer, and also figured out that it cost as much as house. From there I started getting drawings, schematics and plans on how to build these things."

Did your interest peak with late-'70s, synthpop?

"Totally. The way people were incorporating electronic sounds into rock music was one of the most interesting things that was going on. It was an amazing moment, because the instruments were being invented at the same time as the artists were using them, and those two things influenced one another.

"Kraftwerk was my first encounter, and then all the others that came from that, Tangerine Dream, Klaus Schulze, and later on, Vangelis."

Can you explain the concept behind your new album, Sleep?

"There are a few things that come together in it really. The first is exploring this meeting point between mind and sound. We're used to listening intentionally while we're awake - we make decisions about what we're hearing and analyse it.

"It's a very conscious process, but when we're sleeping it's not as if our mind is switched off, it's just in a different state. So I just wanted to explore how music could connect with the landscape that our mind inhabits while asleep.

"Then there's the concept of the lullaby, which is something that is pretty much universal in human culture. Why do people all around the planet connect the idea of a song with going to sleep? There must be something fundamental going on there."

The tracks are interlinked, each time returning to the Dream source?

"It's a quite a classical idea, based on variation form. I thought to myself, if I'm asleep and listening to a piece of music then I wake up, I'd love to know where I am, I'd love a sense of recognition, and variation forms offer that. It gave me the perfect opportunity to really investigate that process.

You also looked into the neural processes behind how the brain functions when asleep. How were those principles applied to the music?

"There's been a lot of new work done in neuroscience with sleep over the last five years. They've uncovered a lot about what the brain is doing during different parts of sleep, especially this one little bit that comes around every 90 minutes called 'slow-wave' sleep, where instead of electrical activity in the brain being a jumble of white noise, it goes into a singular phase. All the neurons switch to roughly 10 Hz, which is very slow-wave for the brain."

What are we doing during this slow-wave period?

It's where we do the structuring of all our event information during the day; learning, consolidating and making long-term memories out of short-term memories, which is obviously really valuable and beneficial.

"It's perhaps the origin of the phrase "I need to sleep on that" - because you actually do (laughs), and it turns out that you can actually induce this state with music, and people have been experimenting with that in the lab. So there are a couple of things in the music that try to suggest that we might be able to induce this state, which has a lot to do with the low-end in the music, and I'm a complete bass-head anyway."

The electronic aspect is very subtly blended in, what form does it usually take in the compositional process?

"I just use the tools that feed the material, and artists have always done that. If you think about how orchestras grew in the 19th century, composers always grabbed the latest sounds and instruments.

"Hendrix embraced feedback because somebody invented that kit and a new language grew out of it. For me, some ideas live naturally on a piano or violin and some live in a tape machine or the computer, and I will use whatever tools I think were meant to tell the story."

It seems like a daunting task to record an 8-hour album. How difficult was it to take distance and be able to reflect?

"It was a real challenge actually, in a lot of ways. Normally when you're recording something you'll do a take that lasts a few minutes, listen to it and make decisions, but in this case if you do a take that lasts one hour the whole workflow becomes really challenging.

"I've been writing Sleep for a couple of years on and off, but, like you say, it takes a long time to get distance on things. The eight-hour pieces are a landscape to inhabit, so, in a way, you're in your own movie."

Where was the album recorded, and how?

"Because it was such a big project, it lived in a lot of different settings. In New York, we recorded some parts on Pro Tools, just because the duration of the tracks meant we had to record in a very high resolution.

"I kept the analogue aesthetic as much as possible; all the summing and outputting of the mixes is analogue, but a lot of the heavy lifting on the processing side is digital because these files are so big."

Did you test the album by sleeping to it yourself?

"I can't unfortunately, because I can't stop thinking. When listening to this music I'm analysing it and thinking about what the notes are doing; stuff like reverb and EQ.

"In a way, composing is a sort of daydreaming anyway, that's one of the things it feels like to me, a thinking-aloud process. I sort of tested it by writing it."

Do people increasingly struggle to find time for music that has a lengthy, spatial element?

"I think that the data universe we live in is accelerating. Everything is going faster and there's more of it. This is part of what the project is about, trying to make a big pause button so you just focus on one individual object or piece of music or art. I like the idea that you can relax into this big object."

Why do you think sales in classical music are forever shrinking?

"Cultures change and classical music is mostly historical culture, it's like a museum. We've got stuck in this idea of classical being back there somewhere or that it's highbrow and you have to be clever to like it.

"A lot of weird social attitudes have grown up around it that are really destructive because it keeps people from being able to appreciate what is great music after all. People have walked away, and quite rightly, but now I think music cultures are joining up and the boundaries between them are more transparent. Because of the download culture, file sharing and YouTube, everybody has an opportunity to follow their ears."

What can you tell us about the upcoming concert performance in Berlin?

"We're playing a live show that starts at midnight and ends around eight in the morning. We have around 500 beds and the audience will come, go to bed and we'll start playing the pieces in real-time overnight. Hopefully the audience will sleep through it.

Do you have any plans to work with other artists? We've recently realised the Future Sound of London track 'Max' is actually named after you.

"Yes, that's right. That was a really interesting time, they're very talented those guys. I'm working on a few different things, but front and centre right now is an HBO show called The Leftovers, which I wrote the music for last year. I'll be doing some more this year too.

Both 'Sleep' (Full 8 Hours) and 'Sleep' (Album-Length Version) are available to preorder now.