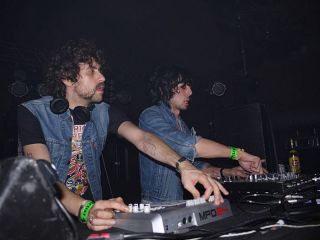 Justice are known for their explosive DJ sets - the picture to the right shows them in the heat of mixing battle. However, look closely and you'll notice that not everything is quite as it should be.

While Xavier de Rosnay (on the right) tweaks his mixer, Gaspard Augé is making adjustments on an Akai MPD24 drum pad controller. The only problem is that this isn't actually connected to anything.

Let's take a closer look at the MPD24's rear panel, which features all the device's ins and outs.

In the Justice pic, it's pretty clear that neither the standard MIDI Out or USB port is being used, which means that any controller movements that Gaspard is making aren't actually doing anything.

Before you start jumping to conclusions, though, we should say that he has offered an explanation.

"I couldn't remember the city but I think it was in Manchester. I didn't notice at first, because as you can see I was looking at the computer to launch the next vocal hook and right after I realised that the blue screen went black, so there was no way possible it could work. So I plugged it back in, big deal! And the next thing you know is this picture."

In fairness, you can see the end of a USB cable sitting just behind the MPD24, so it might just have fallen out. The photo certainly seems to have caused some embarrassment, though, even if it doesn't quite tell the whole story.