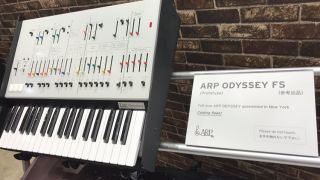 It looks real, but there's no official word from Korg regarding the ARP Odyssey FS.

We've only just digested the news that Korg has launched an iOS version of its ARP Odyssey synth revival, but now we get unofficial word that a hardware synth with full-size keys could be on the way.

Images that have appeared on Twitter and forums appear to show a prototype version of the ARP Odyssey FS, a full-size emulation of the famous synth. Korg's regular Odyssey, of course, is around 14% smaller than the original, and features the company's 'slimkeys', which aren't to everyone's taste.

Time will tell if the FS Odyssey is for real and going into production, but given that Korg followed up its MS-20 Mini synth with the full-size MS-20 Kit, it certainly seems plausible. We'll bring you more news as and when we get it.