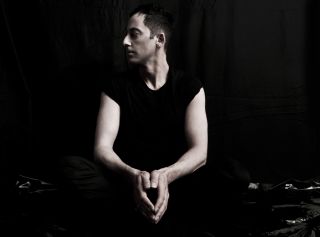 Dubfire is a true dance music veteran. As part of Deep Dish, Ali Shirazinia conquered dance floors and radio waves across the world, remixing everyone from BT and Michael Jackson to The Rolling Stones and Justin Timberlake and claiming their fair share of Grammy nominations.

As a solo artist, his success has been no less remarkable, playing in some of the world's biggest clubs, remixing Plastikman, Axwell and Booka Shade, starting and releasing on his own label, SCI + TEC, and winning multiple awards including Beatport's Best Minimal and Best Techno artist. On top of his success as an artist, Dubfire also pushes technology in his DJ sets, testing Native Instruments' X1 and S4 controllers long before they hit the market and incorporating Maschine and even TouchOSC into his shows. We grabbed him backstage at one of his shows for a chat about all things technology.

First thing's first, tell us about your live setup.

"I use Native Instruments' Traktor on a 17" MacBook Pro, using two X1s as controllers. I run Ableton Live and Maschine on a separate 13" MacBook and I use a TouchOSC template to control both. I also use a Roland Space Echo RE-201 pedal for some added tape delay effects.

"So in total, I've got six different channels going on an Allen & Heath XONE:92 mixer and yes, at times it does my head in!"

You're a big Traktor fan - when did you make the move and why?

"I don't recall the actual year but it was a long time ago. I had been using Serato up until that time but felt very limited by its lack of features and the poor sound quality of their audio interface. Not to mention that they had very limited artist relations with DJs like me who were more involved in the Electronic underground circles.

"They seemed to make hip-hop and mash-up DJs more of a priority, which is fine but that didn't work for me. The staff at Native Instruments have been nothing short of amazing in making me feel involved in the continued evolution of their software and hardware."

You said you use TouchOSC - do you think the iPad has a big part of the future of DJing?

"Very much so. Especially in terms of how you can create fully customisable templates for TouchOSC as well as the general use of the iPad's multi-touch display - you are no longer limited by hardware design. And I'm sure by now everyone has seen the token multi-touch display video demo online so I'm salivating at what could be in store for us just around the corner!"

You were one of the fi rst DJs to use Native's S4 - what is it you like about it?

"I've only really used the prototype and once live at Space in Ibiza where we filmed it in action for the teaser video. I do like it - it's an all-in-one unit that will eliminate the need to carry all but your laptop, a USB cable and an RCA cable. It is absolutely ideal for some people.

"Whether it's right for me per se, remains to be seen but it is a fantastic new tool - especially used with the new Traktor update and control of the sample decks."

Tell us about your studio setup. What's been the biggest technological change since you started out?

"Mainly moving from straight MIDI to a strict DAW setup and the advances which have been made to sequencing and editing software. I've always said that it's fine to be a slave to technology but it's the ideas that matter the most.

"The genesis of creativity begins in the individual mind and that is the true measure of the artist. Technology merely allows us to express that in different ways."

Speaking of technology, any technological DJ disaster stories for us?

"Of course - way too many to mention! I've had bad USB cables that have died mid-set, cutting out all sound output, I've hit the wrong button on my controllers and killed the music, I've had my old black MacBook overheat and shut down about four or five times during a gig, I've had my tour manager accidentally pull my USB cable out of my MacBook while he was moving it - as I was playing in front of 10,000 people!

"More recently, I knocked a glass of sake onto my own mixer while playing with Richie Hawtin during our Click 2 Click show in Amsterdam in 2010 and basically killing the mixer for the remainder of the night! Not good."

According to Twitter, you seem to be touring a lot - and eating in great restaurants! When do you get a chance to make music?

"I don't! At least I didn't get much of a chance in 2010. But honestly, I worked tirelessly in the studio my entire career in pre-, mid- and post-Deep Dish and then beginning with my solo career, right up until March 2010 so I needed a break.

Does your setup or equipment change?

"The equipment and setup is pretty much always the same but song selection will vary, depending on who is playing before me and the mood that they have created in the room - sometimes the DJ has killed the vibe and I have to step in and do my best to create one again and other times they've been rocking the room and I have to figure out what the hell I'm going to play!

"Every situation is unique and challenging and that's what keeps me inspired."