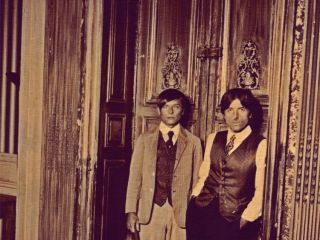 Check out the video above to see a clip of the latest Air project, a soundtrack to the George Méliès 1902 film, Le Voyage Dans La Lune.

The casual Parisian pairing's last release Love 2 was yet another Air classic and returned Air to their roots of self-production at their brand new Atlas studios in Paris. Love 2 served up luscious melodies, electronic and acoustic contrasts and that delicious pinch of psychedelic influences that Air do so well.

Now the duo are set to release a new album, based on their soundtrack to the coloured re-imagination of George Méliès groundbreaking 1902 cinema piece, Le Voyage Dans La Lune. We caught up with them at the EMI HQ in London to talk about the new project, their approach and what the future holds for Air.

It's much more live and percussive sounding than other albums.
Nicolas Godin: It was all done at our studio, Atlas again but we wanted to do something more home-made because the nature of the film is hand made. We knew something that something clean would be in horrible taste against the film.

Would you say there was less synthesis on this record?
NG: "I don't know if that's true. We used a lot of sound design tools from Reaktor and iPad software."

For such an old film the project's tools were actually very modern.
NG: "Yeah because when you're using new technology, you make some mistakes and that makes the overall sound very broad. When you take something and see how it works it keeps the same spirit as cinema in 1902. Then, cinema was a new technology that people want to explore. We've always tried to blend the old and the new together."

What was your approach?
Jean-Benoît Dunckel: "We were watching the film constantly and searching for something that can fit. It was a constant battle to try and get things down as fast as we can and synchronize the music. Once we had the main scenes then we could start then to make them thicker, more interesting and add melodies and other musicians."

NG: "Many times, because I do the bass guitar I try to say to my self how can I do something differently? For instance on Talkie Walkie I decided not to do the bass. For this project we decided to use the Timpani's a lot for the bass. It's very cool because you have a pedal for tuning so you can play any note you want. But then it's hard to mix it because it takes up so much space.

"When we saw the film for the first time in colour we really got all of these images of Sergeant Pepper in our mind. It was as if adding the colour had taken the movie from Paris 1902 to London 1967. We weren't directly trying to sound like Sergeant Pepper, it was just as soon as we saw the colour on the movie, we knew it had to have that element. We explored this with the styles of the drums particularly."

How did you then translate this short film soundtrack into a full, new Air album?
JBD: "Many of the tracks were much longer and were edited down for the film, other tracks were recorded during the sessions but weren't right for the movie."

What projects are next?
NG: "Well I don't know because, it seems like five minutes ago we were offered this opportunity from nowhere. We have a lucky star in the sky that puts some interesting projects like this in our path."

No chance of another commercial Air album?
NG: "I don't know because it's kind of depressing to make records nowadays. That's why this was cool because it was an excuse for us to it. We've made so many albums already that I don't want to do another for no reason. I think if you like air we have done some amazing albums already that you can listen to still now. That's the strength of those albums, that you can listen to them again and again."

Can you still listen to them?
JBD: "No, only when we go on tour when we have to learn the songs. But we toured for a whole yeah before so for now a think we need to take a year at home."