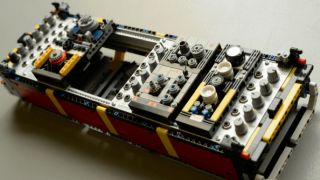 If you were to ask what the ultimate Euro-modder's dream would be, our guess that it might be made of Lego. Nothing gets the nostalgic juices flowing more than those unmistakable Danish blocks.

Enter Daniel Mueller. After embarking on a project to create a Eurorack case out of Lego, he has taken things one step further by building his own synth modules.

As the images on his Flickr photostream show, Daniel has come up with some authentic-looking Lego modules to sit among some Doepfer units. The only downside is that they don't actually make any sound, but it's surely only a matter of time

This is not the first time the worlds of synthesis and Lego have collided of course: just check out these Lego Minimoogs, and how about some Daft Punk Minifigures to play them?