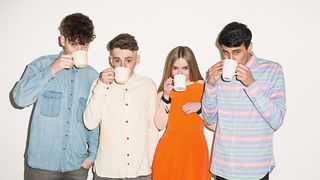 Below we catch up with Clean Bandit who recently had chart success with their track, Mozart's House. We spoke to Jack from the band to find out how the track was created and take a peek inside the portacabin studio where Mozart's House was produced.

First off, tell us a bit about Clean Bandit, the roles in the group and how everyone got together?
We met at university. I did some recordings of Grace's (cellist) string quartet and started playing around with them. We met Sseg the vocalist in Mozart's House there too.

What are Clean Bandit's main studio 'weapons'? What do you use as your DAW?
Strictly Ableton Live from writing to mixing to performing with.Other weapons include an ART Ultrafoot,an Akai EWI and a GEM Wizard. I mostly work in the box, sometimes I re-amp stuff through my iPhone cause I like how it resonates. Oh, and melodyne on absolutely everything!!

Tell us about how the bones of Mozart's House was built, it sounds very sampled, was it a sample that started the idea?
Yes it was a recording I made of the quartet that started the idea. Forthe record we recorded the strings in my studio.The initial recording had a couple of tiny errors we wanted to fix. We spent a long time trying to make our portacabin in Kilburn sound like Kings College Chapel and I'm not sure we succeeded but I like the overall result.

Clean Bandit's studio, built inside a portacabin in Kilburn

Talk us through the different elements of the track, where the synth line is from, how much of the vocal is sampled / resampled?
The synth I built with operator, a midi chord generator and a midi randomizer. I played it in on a Korg padKontrol, which I love more than anything. I assigned a nob to modulate chord variations and hammered it out a few times until I got that riff. I then did the same with the randomiser. The vocal isn't really sampled, it was recorded on a AKG c1000 microphone in Grace's bedroom as a demo and we stuck with that take. But it was a linear recording with a couple of sections looped, I wouldn't describe it as sampling or resampling. The intro is the whole song sped up 2000% played backwards and filtered.

The overall production is quite noisy and gritty, is this an off-shoot of sampling and analogue gear or an intentional styling?
Haha it's not intentional. It's just my budget equipment. All digital I'm afraid apart from an old analogue bit-crusher my Nan gave me which I run all the synths through.

Which filter is used for the breakdown?
It's just a native Ableton auto filter. We are thinking about getting a Mutronics stereo filter but I think life's too short for investing in loads of sick analogue gear. Plus for the same price you can buy two i7 Mac minis or a flight to Antigua.

Were there any major changes to the track along the way that made you realize that you were on to a winner?
There was very little back and forth on this track. I made the instrumental on my laptop at the dinner table in my old flat in Moscow and sent it to Sseg on email. We recorded it when I got back with very little change.I think we knew we were on to a winner from the start!

Is the track built alongside a vocalist riffing off each other or was there a finished instrumental 'bed' before the vocal hooks were added?
The instrumental bed was there before we added the vocal but I'm trying to work less in that way now.