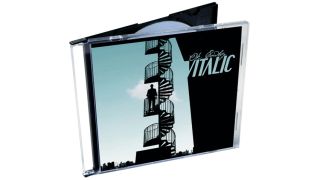 Everyone from Aphex Twin to Sven Väth had 2001's Poney EP at the front of their boxes, and anticipation for his full-length album ran high. Arbez gathered previous EP tracks and worked on new material that bridged his tastes for punk and disco with cutting edge synth-led electronica. "I stopped thinking in terms of 'techno'," he says. "I've heard what I was making called 'retrofuturism', and I think it's the right term."

The full-length release, OK Cowboy, only shocked in so much that it kept the quality up, as well as featuring a host of surprises, helping create an album that would go on to be mentioned in the same breath as Daft Punk's Homework.

"I wanted to take the risk of distancing myself from my techno background, because I didn't see the point of 12 techno tracks in a row on a CD," Arbez says. The music, part Giorgio Moroder, part Iggy Pop, wasn't the minimal sound everyone else was peddling. Nor was it the electroclash Vitalic was known for. It was playful, and reflected Arbez's personal journey to now, through his musical influences.

"I loved electroclash in 1999 because it was fresh," he says. "Then this 'techno for intelligent people' arrived. It wasn't my cup of tea, because I'm more impressed by a good melody on a track, rather than pre-sampled bleeps and bloops.

"The new album tracks weren't just dancefloor-oriented. I made these short, weird pieces, which were more like polka, or straight-up pop songs like My Friend Dario. The thing is, I wanted to do something that nobody was doing at that time, which was to mix Jean Michel Jarre with Iggy Pop and Moroder, but on the same record. It was an album I'd been waiting my whole life to make."

Here, Pascal talks us through OK Cowboy, track by track.

"This mini song was like the track zero on the album, before the real music starts. It was hidden - you had to rewind the CD to hear it. I love it when artists sneak material on to albums. It can take you years to find them. It's like buried treasure.

"One Million Dollar Studio was an opportunity to make fun out of myself as well, really, because I was only using a very basic and punk studio setup. It certainly wasn't worth a million. That was my fantasy."

"My first son was born while I was making the album, so I wanted to compose a little lullaby for him. Obviously it was perfect as the first song on the LP.

"I don't really remember when I first sat down to make the album. I just know that it took some time before I really started because I couldn't focus, with all the work and personal stuff I was going through. I was discovering so much, outside of the studio, by travelling and meeting people all over the world, that I really took my time to process that and make music about it."

"I had the idea for this song in 1997, while I was at a funfair. I was inspired to write the track after seeing all these kids having fun on the enslaved ponies. It wasn't until 2000 that I actually sat down to write it. The image had stayed with me, though.

"I wanted to do a punk track, but with fake guitars, fake vocals, and fake drums. It's something I had wanted to do for a long time, just for the challenge, really. I like to set challenges for myself in the studio.

"The studio space was great to work in, all round. The room was not that big, to be honest. That was good, though, as I never really like to have too much equipment around me all at the same time. I liked it quite basic. I did have some nice chairs and stuff, though. I ended up buying all these great old cheap 'JR from Dallas' style pieces of furniture to kit the place out with.

"It was funny - people that visited me there said that when they got inside it was like a real time travel experience. Which was good for the music, as I was looking back… but in a weird futuristic way."

"I just had this melody in my head and it needed to come out. That is the main thing I have to say about this track.

"I really don't have any special habits when it comes to coming up with and writing a track. I usually have an idea, which can come from anywhere, and then I like to make a draft. After that, I just leave that draft to one side for some time, and then I get back to it later.

"It can happen that some great idea can arrive just by playing on a keyboard, or making a sound with the knobs on a synth. I would say that I never make a song in just one day. It needs to grow by itself, slowly. Sometimes it takes years for me to write a song."

"The idea with La Rock 01 was to make a song with an endless rising vibe. I added some weird dotted LFOs to it that would give this feeling that the sound was continuing on some long unstable wave.

"I also wanted to set myself the question, 'What would punk music sound like in the year 2001 if you only used synthesisers?'."

"The Past is my Jean Michel Jarre-inspired track. That is his influence coming through. It
made me very nostalgic, hence the track title.

"I used to love those Moog lead lines that he'd add on top of light drum machine programming. That's what I was going for here. It is quite 70s, really. That's a period of musical time I enjoy very much."

"This reminds me of No Fun by Iggy Pop. I loved his style too. Punk and electronic music from that era were both great, and very influential on me.

"It helped that the studio was stuck in a time warp from that era, too. I left everything like it was when I found it, with the superb 70s wallpaper and funky old carpets. I could see the forest out by the window, which was really cool. And because it was away from everyone I could make all the noise I wanted.

"It was easy to move in, but setting up was a pain. It took a lot of time to move from my Akai MPC over to Logic on a brand new Mac setup. This is also the reason why I was really slow at producing the album.

"On No Fun you can hear a lilting musical motif that sounds very 70s. I love it when melodies go down and back up again at the end of a tune. You can hear me doing that here."

"This was actually the first song to be produced on the Poney EP.

"I discovered how to make those crazy vocals with a vocoder that I had. That was great fun to play with. I also got sounds like that using the Novation Nova - I really used that piece of equipment a lot."

"I love the songs of [Reverend and electronic music pioneer] Chris Korda. Especially the ones where he would record a simple sentence and then just move the cursor of the sampler to make effects while reading the sample [Korda's infamous effects processor loop technique].

"I never really understood how he achieved that effect, so I had to cut every single syllable of my attempts
to try and make them sound the same as him."

"This was originally recorded as a song for my live shows. It is a very hard sounding track. I wasn't even sure if I should put it on the album, as it was so different, but everyone that heard it said that I should.

"I usually prefer it when sounds and drums are not right, as well, if you know what I mean? I really like it when the drummer in a band makes mistakes. It is human. That is something that I like to reproduce in my songs. OK Cowboy is full of mistakes, and to be honest, it is a bit clumsy. But it's the way I wanted it to sound, so I'm okay with that. I don't think you should be too precious with your songs. Anyway, once a record is recorded I never listen to it again."

"This is made up chiefly of organs, pads and melancholy. That song was used a lot in movies, actually. They had it in the trailer of [the 2007 French film] Naissance des Pieuvres. You can still hear it a lot on the TV in France. They always use it for the very sad moments in dramas."

"This song was the very last one that I made for the album. I was really up against the deadline for it, too. The label really wanted one more song, and I had nothing, so I knuckled down and put this one together.
"It was late at night when I was making it, and I just really had to finish the record. Looking back now, it feels a bit rushed. So, I'll be the first one to admit it's not me at my best."

"This was inspired by a trip I'd taken to Malta - I really love that island. There is this big culture of fanfares there, which I love, so you can hear that influence on this track. When I was a kid I was made to play the trombone, and I hated it. Maybe this is me coming to terms with that and trying for that sound again?

"It was a fun album to make. It sold well, and the response was good. Of course, there were some disappointments and bad reviews, but that is all part of the game. It did lead to a long tour that took me all over the world. That is maybe the coolest and most inspiring thing that I have ever experienced.

"It was a great moment of my life, making OK Cowboy. It was when I did all my 'first times'. I have this album to thank for that."