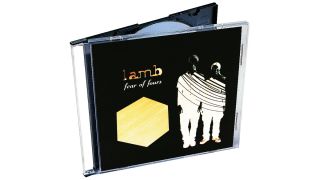 There are worse things to be afraid of. For some people it's sharks. For others, clowns. For a haunted few, it's some ungodly combination of the two. For Andy Barlow it was fours. That is, the 4/4 beat that keeps dance music firmly in its place. It was a rational fear. For him it represented everything that was wrong with modern music. It was lazy, predictable, pedestrian and unchallenging: Doof! Doof! Doof! Meh…

Since forming Lamb with singer Lou Rhodes in 1996, Barlow has used the band as an outlet to push his programming and challenge his beatmaking skills. Their self-titled debut set their stall out early, and by the time of their sophomore effort, Fear of Fours, he'd mastered the boards.

On Fear of Fours his left of centre beats flit between moods, tempos and genres (occasionally in the same song) as they attempt to frame Rhodes' brittle vocals. Standout tracks like Little Things swap time signatures like batons in a relay, each new wave driving the music forward. While heavyweight single B Line feels like the soundtrack to some vaudevillian Jekyll & Hyde musical, but in a good way.

"By the time we came to record Fear of Fours it felt like everything in 4/4 had been done," says Barlow. "I've always liked interesting time signatures. "When you're in 7/8, or 3/4 even, you get a loop that you've heard a hundred times before and it can immediately have a different feel to it. It's a lot easier to find uncharted territory when working with different time signatures."

Even today the album is a rewarding listen, and still a gauntlet slap to producers unwilling to take risks or simply explore outside of the norm in their music. Fans of the album can rejoice once more, as Fear of Four has just been reissued for the first time since it dropped in 1999, and is available as a double gatefold, 180-gram, limited edition, vinyl release.

"This was a hidden track at the beginning of this CD. You'd put it on track 1 and then have to rewind it to find it. I don't think it had been done before. There was someone in the mastering studio at the time that mentioned that they had this new type of CD technology so you can now have hidden tracks at the beginning of CD albums. We thought that was quite cool because people normally put hidden tracks at the end. I think we were just flexing our anarchist muscles."

"This track is in a 5/4 time signature, and it's called Soft Mistake because it was a mistake from the track Softly, from later on in the album.

"We were using the Akai DR16 [Hard Disk Multitrack Recorder] and it jammed - which was a rare thing, but it jammed on a loop and that was this bassline. We quickly recorded it back on to a DAT and then from a DAT onto a sampler. I would always have a DAT ready in case stuff crashed, or in case something unusual happened. I continue to think mistakes are sometimes the ultimate seeds of ideas because they are outside our comprehension."

"This was a single. We had a great video by Hammer & Tongs, who'd done Right Here, Right Now, which is quite funny, as before I was in Lamb I was signed to Skint records, home of Fatboy Slim. The fax treatment they sent through said, 'Scene one: Andy is fiddling with an electronic machine and hooks Lou up to some cables. Scene two: Lou's head explodes into a robot. Andy controls her around, looking not bothered at all.' They had these little basic diagrams with it as well. We knew that it just had to be the one.

"Jimi Goodwin [Doves, Sub Sub] plays guitar on this one. He used to go out with Lou."

"Track four. It's four seconds long. On an album called Fear of Fours. We were being very cryptic [laughs].

"That's about as short as a track can be. I think a track has to be over two seconds long for it to be able to feature on a CD."

All In Your Hands

"We got recommended this guy called Ben Parks to score brass for this one. He was a brilliant brass arranger, but I remember when we got to him he'd done this really avant-garde thing.

"We just needed something dirty that pinned down our chorus. So we rewrote it as all the players waited. It's probably the first time we'd asked for brass or keyboard strings. Not many arrangers want to give you their stuff as samples because it never sounds great. But this was the first time we got bitten. From then on we always ask for a MIDI arrangement so we can kind of see the shape of it."

"This was a nice little riff I had on my keyboard. It was just messing with a nice collage of sound and seeing what popped out. It was a short track. We wanted to reset the tone between All In Your Hands and Bonfire. It was a rest before Bonfire, really. It was important to have those moments. It was quite a long album at 14 tracks."

"This track took the longest to put together out of the whole album. It all stemmed from the string sample at the beginning, then we built the track around it.

"Even when we mixed this one it took ages. We spent four days on it at Nomis studios in London. The drums were done on the Akai S3200 XL. We might have recorded them. After a session I'd always chop them up as if they were samples. That's what gave us our sound. Especially on the first album, as we had no means of recording stuff, so we used samples."

"I was really into techno and drum 'n' bass, and I wanted to do an instrumental that had some of that energy. I had these two live players - Jon Thorne on double bass and Kevin Davy on trumpets. I wanted to combine what they could bring with the searing, bright synths of dance music.

"This has some frog noises in and some Charlie Parker samples as well. When we sample stuff we usually mess around with it. I think sampling is a wonderful art form but, if someone just lifts something and doesn't do much to it, it's a bit dull."

"Jon Thorne again on bass. He's like the unofficial third member of Lamb. He's a fantastic Jazz double bassist. Graham Massey [808 State] recommended him. When Jon came in he just looked so square we thought it'd never work. At the time I was going to all these free parties, and he tagged along and expanded his mind for the first time. It blew his mind. From that point onwards 'Jonny Low-End' was born. He was a monster. From then on, there was a marked difference in him [laughs]."

"Not so much a fear of fours on this one. To be honest, it's an odd one out on the record. It doesn't particularly sound like Lamb. It's not one of my favourites.

"The thing with Lamb is that we didn't really have 'excess' tracks. When I produce bands now we make 20 songs, then work on the ten best. With Lamb it's like, 'Okay, that's an album's worth' [laughs]. If the A&R man wanted more, or for us to try something else, we'd be like, 'No. This is the record' [laughs]. We were hard to manage."

"This was interesting because it was for a movie. It was for the remake of Psycho in 1999. It was written for that. That was the first time Lou had written lyrics from anything other than personal experience, and instead based it around the movie.

"I don't know if they ever used it in the film, but it was on the soundtrack. I can't remember if I saw the film. Or if I did, it didn't leave a lasting impression on me. It didn't matter because we loved the track and used it for our album."

"When Lou was pregnant we had this idea to do a track around the baby's heartbeat. So we got that ultrasound device out, which had a headphone out socket which we attached to a Minidisc player to record the heartbeat, which is dotted throughout the mix. It's in 7/8.

"I really love Alien. It's kind of really internal and dark and mystic, but it's ultimately a really beautiful song. It's Lou saying, 'I'm a happy home. What's it like in there?' It's a mother singing to her child, but the backing is so menacing [laughs]."

"I love Five... five is my lucky number. This one took a long time to make. It was quite an epic journey. The track is in 5/4, obviously. It features Jon Thorne on bass, again.

"I think this is also the first Lamb track that I mixed myself. I rented a couple of 1176 compressors and added them to my studio to do the job. The drums were played and re-sampled on this one, as well. It's quite a drum-heavy track, which makes it sound a bit tribal, but still uplifting and beautiful at the same time.

"Again, it doesn't sound like anything else on the album, which is quite a good thing."

"This is a really beautiful song. We tracked it with a 25-piece orchestra. We've done a new version of this, which we released last year. Lou re-vocalled it, and it sounds so much better [laughs].

"I really love Fear of Fours. It's a nice listen all the way through. We were more of an albums band than a single band, anyway. This is one of those albums that when it came out, the feedback from friends was like, 'Mmmm...' They heard it and weren't really into it.

"It was only over a period that they revisited it and said it was good, then a while later they really liked it. It was a slow burner.