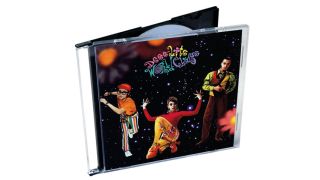 Deee-Lite's World Clique: "The record label would tell us, 'This isn't real music. You're using computers!'

Our story begins like many do, with a hit of acid. It's the mid-'80s, New York, and future pop pixie Lady Miss Kier is back at her apartment with her then beau, Super DJ Dmitry. She's at her wit's end, trying to make a go of it in fashion, he's buzzing off one of his nightly eight-hour DJ sets. They wonder how they can combine his art for moving butts with her gift for melody and perfect packaging.

Maybe a tab of LSD will inspire them…

"It was my first and only time doing it," says Lady Miss Kier, gingerly. "I'd never even sang before, but we tripped out and wrote three songs. Deee-Lite was formed that night." After coming down, a yearlong writing session took place, amassing them over 30 tracks that they would road test at packed hip-hop and dance clubs around the city. Kier handled mic duties, and dreamt up the kaleidoscopic image for the group, while classically trained pianist Dmitry brought the music. Record digger and DJ Towa would later join the ranks, providing many of the choicest samples.

"We were really into that funky stuff, which wasn't that popular at the time in New York," says Kier. "We started incorporating that with some Kraftwerk - I used to call that 'holographic techno-soul'. The main thing was that we didn't want to fit into one category. For me, the best bands fuse at least three different genres."

The stage, barely able to contain the dayglow pomp of the outfit (and outfits), made way for the studio and, after a major label bidding war, Deee-Lite set to work on their debut album.

"We had three years' worth of material by that point," says Kier. "And because we were doing it live we recognised what songs people liked so worked on them in the studio."

The resulting album, World Clique, would be a riotous eargasm of sound and colour, spawning all-time house party classics like Groove Is In The Heart, and dance chart-topper, Power Of Love. Deee-Liteful hits, no doubt, that were all made possible by that first delightful hit. For more groovy stories, read on, as Lady Miss Kier takes us through it, track by track…

"This was one of the first songs we wrote after I took an acid trip for the first time. We wrote this and a coupla other songs that night. That was the night we formed the band, based on the vibe of this song.

"Most of the parts we came up with made it to the final version, like the bassline. The intro sample came later, as did the horn stab hit. Dmitry wrote that bassline, and the piano parts and chord changes on the night, and then he programmed the drums later on as well."

"This started as just an acapellas melody I came up with, then Dmitry built on that hook. Then we finished it off together, sat at the piano.

"That very first version was really good. That's what I've learned over the years - don't mess with the demos too much. There's a demo version of this that's out there that actually got us the record deal. But then when it came time to do the album, we changed it a lot, I don't know why. It became less of a piano house type of track, which is what it started out as.

"Someone uploaded the original version to YouTube and I was listening to it about a year ago and was like, 'Yes! I knew it. The original version is much better' [laughs]. It never got a proper release. But if you find it, you'll see how the song evolved, I guess."

"This has [P-Funk legend] Bootsy Collins on. He laid down some bass. I think originally we'd used a JBs sample, and he came in and replayed some really sweet overdubs. I'm pretty sure he played guitar on this as well. We didn't sit down and write with him. He just turned up and made everything… better, you know? He knew the songs from a demo tape I sent him, and he'd throw in bits and pieces over the top.

"He introduced us to a lot of the P-Funk players who'd left that scene and were hungry to work with other artists. So, Fred [Wesley] and Maceo [Parker] are on the horns here. That was the great thing about working with Bootsy. When he came, he was like, 'You need any horn players? I know a coupla guys.' Only these two legends! He introduced us to guys like Bernie Worrell, who ended up working with us later, too. I never felt worthy. These were my heroes. We ended up with a full, nine-piece live show with these guys, as well."

"The P-Funk guys again. Bootsy laid down some guitars. He was no drama, just musical goodness. Also his involvement gave us credibility. The wah-wah is all Dmitry. He'd tell these guys what to do, which isn't easy as they're your heroes. Also, because the house tracks were more minimal than wig out funk, he'd have to tell them to just do little bits. These guys were used to big solos and stuff.

"I whistle on this [laughs]. Through my front teeth! I don't know how I do it, it's like a ventriloquist. It bugs people out [begins whistling]."

"This was really different to the other dance tracks out at the time because it was only 110bpm. Personally, I was really nervous about this song because it was so slow. It didn't sound right speeded up, so we left it.

"It took a while but people really got into it. It was our first hit, I guess. This was the A-side and Groove Is In The Heart was actually the B-side of the white label. It blew up in the clubs and was an instant dance hit.

"I heard it booming out of a jeep that passed by my tiny studio apartment, rattling the windows. It was like, 'Wow! Our first brush with fame', hearing our song blasting down the street."

"I was inspired by a Marshall McLuhan article [about the information age]. It was the time when the internet was just coming out. You could buy Grateful Dead tickets online! I knew something exciting was happening.

"Also, people were mashing up world music. I knew something different was happening the moment I heard the Coldcut remix of [Eric B & Rakim's] Paid In Full. That showed me what you could do with a sampler. They weren't just lifting grooves, they were lifting sounds that made you think about the world. It made me think of other countries. Most Americans don't think like that, or even have a passport!

"I didn't know how it was all gonna play out, but I knew we were all going to be connected by technology, somehow.

"I wanted to write a song about a world family. And in the group, we were from all over the globe, anyway. And I didn't want to just write love songs between a man and a woman. I wanted them to be bigger than that. It was about love for the world."

"I was studying all kinds of metaphysical stuff. You know how you do in your 20s [laughs]. I was reading up on any evidence of other worlds. I don't wanna say 'new age', but it was pretty much that [laughs].

"E.S.P was about that. I was always trying stuff out and trying to write messages to my cat [laughs]. The stuff you do in certain phases of your life, you know? My sister was a scientist, and I was the opposite.

"The music on this track was inspired by groups like [Japanese electronic pioneers] Yellow Magic Orchestra and people like [Moog whizz] Dick Hyman. This track also touches on a lot of the types of songs that didn't make it onto the album. We were making fun of a lot of bossa nova records and European movies on those. We had this joke element, which didn't totally come across by the time it came to do an album, but it was a lot more fun and goofy sounding when we first started out. This has a bit of that quirky, funny music that we had then."

Groove Is In The Heart

"Q-Tip does a great verse on this. This was before Tribe blew up. He was hanging with the Jungle Brothers. We opened up for them one time at a club called Hotel Amazon, which is where I would have met Tip. We were playing that song live and he asked if he could do 16 bars on it.

"I remember he came to the studio with a note pad and just started writing it as we were laying down Bootsy's part. It was a one-take, write on the spot, thing.

"Bootsy wrote a whole rap, too, which made it on one of the alternative mixes. People keep asking if Tina Turner did some tambourine on this. She didn't. I don't know where that rumour came from [laughs]. Maybe she was in the bits we sampled? As for the samples. I think Dmitry found the bass from the Herbie Hancock record, Bring Down the Birds, and Towa found the drums and whistle from the Vernon Burch record, Get Up."

"This is one of my favourites. I basically lifted the bassline from a cartoon I loved as a kid called The Hair Bear Bunch [hums it]. Then Dmitry wrote the chord change, and put the wah-wah down. He pretty much had wah-wah on all the guitar parts back then, from what I remember.

"Bootsy added some bass. He played over the one we had already to give it a great low-end. Then there was some kind of robot bleepy bit over the top. It might have been a sample. We tried to clear everything. We did get stung for one though. At the very end of this song there's a really low voice that says 'Hello there'. I think we had to pay ten grand for that. It wasn't even really in the song!

"When we finished the album I did all the artwork and wrote a little thing saying, 'We cleared all our samples, but you can sample us!'. The label took that part out [laughs]. They never supported or understood us, anyway. The record label would tell us, 'This isn't real music. You're using computers!'"

"It was a turbulent relationship that we all had. We tried to keep that out of the songs for the most part, but this is the one that redressed all that super optimism. I also think that I was subconsciously writing about the deep end of a pool because I nearly drowned as a kid. This track was just a bit realer. It wasn't a fantasy. The other songs were based around what we were dreaming for. This brought the album to a close."