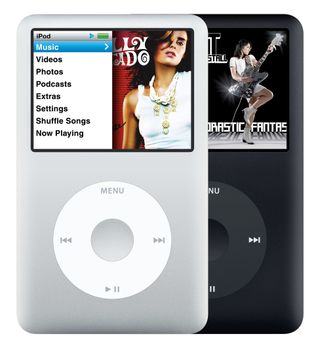 Who needs high-fidelity audio when you've got an iPod? (Image credit: Picture courtesy of Apple)

It's now several years since I was told by various in-the-know industry types that high-fidelity audio was coming and that it would revolutionise the way we listen to our music. I didn't believe them back then and I certainly don't believe them now.

Either SACD or DVD-Audio was supposed to take over the world, but rather than see these rival standards duke it for our affections, we've witnessed them both fade into relative obscurity.

There are several reasons for these formats' now moribund existences, not least of which is that the music-buying public has never been convinced that it actually needs them.

The CD was an easy sell - it offered both vastly improved sound quality and greater convenience - but SACD and DVD-Audio don't represent the same great leap forward. Yes, they sound better, but not so much better that the vast majority of people have ever felt compelled to upgrade.

And whereas CDs suddenly gave us the ability to access and skip between tracks at will, neither of the next-gen formats offers any great usability improvements.

Sure, they enable you to listen to your music in 5.1 surround sound (so long as you've got the appropriate hardware, obviously) but, unlike with movies, most people are still satisfied by the stereo experience.

The biggest thorn in the sides of SACD and DVD-Audio, however, is sitting in your pocket. The industry was always going to struggle to convince people to re-buy their albums at better quality at a time when all most of us are interested in doing is compressing the ones we already have and putting them on our portable music players.

For better or worse, the majority of us now listen to our music at lower quality than we did ten years ago - a strange quirk when you consider how new technology has improved so many aspects of our lives - and we rate the ability to carry lots of music on a portable device far above having 'better-than-CD' sound.

Factor in the culture of filesharing and high-definition audio never stood a chance.

Think in broader terms and you realise that this has implications for music makers. If it's been demonstrated that audiences aren't concerned with listening at the best possible quality, then surely it's time for recording artists to focus less on polishing their 'sound' and more on writing music that stands up to scrutiny regardless of how many production dollars have been spent on it.