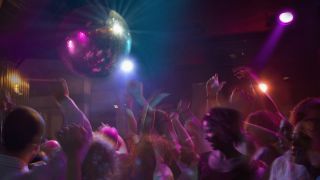 You've spent weeks in the studio, toiling over your new track, tweaking every element to perfection. Now it's time to play it out live and get a crowd's reaction.

Stop right there! Don't just cross your fingers and pray to the deities of disco. You need to be sure your track will cause murder on the dancefloor.

Up until now these secrets of dancefloor success have been locked away inside a titanium mirrorball with the only access codes kept in a superstar producer's private vaults. However, we've gone and cracked the code and can now reveal the top 9 ways to ignite your own disco inferno.

Prepare for jaws (and drinks) to drop, as we reveal the skills you need to entice far more than four to the floor...

Saturday night clubbers are simple souls... and usually wasted. As long as they can remember a basic melody with a few words, they'll be happy to yell it all night long.

With this in mind, strip your chorus back to its fundamentals. Use a vocalist who has the power and punch to roar a repetitive earworm. DJ Snake and Lil Jon's Turn Down For What is an extremely ballsy example, where Lil Jon shouts just four syllables over a minimal trap production.

Now, can we get a shout out?

2. Get a perfect pump

Ah, sidechain compression... the 21st century equivalent of a German Oom-pah band. This EDM technique can put the pump into your production and send droves to the dancefloor, but you've got to get the timing right.

It's all too easy to screw up the groove of your track by dialling in the wrong compression settings. Set a fast attack and knee at 0. Then fiddle with your release timing so that the 'pump' happens on the off-beat or slightly later to create a swung feel. To get an even cleaner kick drum, route your sidechain from a silent track where the trigger signal is timed a few milliseconds before the actual kick.

This technique is an absolute classic and goes all the way back to the disco-era and beyond. Have a listen to Marvin Gaye's litigation landmark Got To Give It Up, which has heavily mixed party ambience throughout. You can convince your crowd they're having a good time if they hear that other people are too, even if the cheers are within the track rather than the room.

Breakdowns and builds benefit especially from this fakery: N-Trance's Set You Free is a perfect example which utilises cheers and rave-era air horns during the otherwise sparse breakdown.

It's all too easy for DJs to tire out a crowd with a succession of 'quickies', so to speak. Bear this in mind when constructing your own tracks by writing growers, not, err, showers.

A long slow build up will create anticipation and eventually a frenzy in your audience. When that final explosive drop kicks in your crowd will come to the dancefloor.

Check out Josh Wink's Size 9's I Am Ready for a ridiculously long-winded example, with more drum rolls than a somersaulting samba section.

The dynamics of most modern dance tracks are squashed to within a decibel of their oh-so-short lives. To get your drops to really slam, lower the overall volume of your breakdowns, before the beat kicks back in.

You don't want an over-enthusiastic master compressor undoing all your hard work, so set up the gain automation as the final effect on your master channel.

With any luck, this technique will lull your unsuspecting crowd into a false sense of security before your obnoxious kick and synth combo blows their eardrums in.

This one is an easy win for music producers who are more lyrically inclined. If you want your tune to become a big-room anthem then make sure it has lyrics that reference dancing/girls/drinking/partying/having an awesome night/all of the above.

Look at the evidence from tracks like DJ Fresh's Make U Bounce and LMFAO's Party Rock Anthem. Yes, the themes are barefaced floor-fillers, but your crowd won't care about a little psychological seduction once the strobe hits 'em.

If you have the creative know-how and the budget to produce a music video for your track, then you can attempt to kick off a new dance craze.

Just look at Psy's multi-billion views for Gangnam Style or any old Steps track. The signature dance moves have catapulted them to wedding disco infamy. Once a crowd knows your moves, they'll be keen to rush the floor and show off their skills, however ridiculous.

A word of warning: If your song lyrics also blatantly spell-out the choreography then you're heading for a credibility calamity. No-one wants another Cha-Cha Slide!

8. Funk up your drums

Most humans have an inbuilt sense of rhythm, and we just love to dance to a funky beat. A swung or shuffling groove is far more organic than robotic 4/4 quantisation.

You can introduce a bit of humanity into your own tunes by utilising old-school breakbeats and other rhythmic elements. Even for the most modern EDM producers, a shuffling hi-hat or shaker rhythm is significantly more danceable.

Use your DAW's groove templates or similar function to automatically inject this swing into your drum parts. Before you know it, nobody's hips will lie.

9. Rip off your heroes

As the saying goes: imitation is the sincerest form of flattery. If that's the case, then dance music producers must be the most flattering people on the planet. Every producer from the triple-A artist right down to Jonny-cum-bedroom have ripped off popular tunes to increase their dance floor recognition.

Whether it's a straight-up sample or a rework, there's no better way to get punters moving than Xeroxing a track they already know. Detractors may say that familiarity breeds contempt, but once a crowd hears your latest recycled riff, you won't shift 'em until closing time.