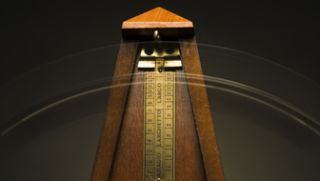 People who don't understand dance music sometimes say that 'it all sounds the same' and in certain respects, they'd be correct. The endless repetition of kick-snare-kick-snare does lend a certain predictability to most productions.

However, it doesn't have to be like that, and exploring alternative time signatures is a great way to make yourself stand out.

The thing about dance music that differs from other genres is that if you want to write a song in a time signature other than 4/4, you actually have to make a conscious decision at the start of the project and change settings in your DAW. This is a huge mental shift for artists, but some have embraced the challenge of writing in alternative time signatures.

Here, we're going to celebrate some of the great things that electronic music producers have achieved with metres other than 4/4. Some of the artists try to hide their time-shifting techniques, while others use them more overtly as a point of difference in their music.

So, come with us as we forgo four-to-the-floor in favour of some mind-bending time-bending...

The full length mix begins and ends in 4/4 (presumably for DJ mixing purposes) but the entire middle section is at a steady 6/4 time signature. Rather than mangling the sample for its own purposes, Joey Negro's production is sympathetic to the source material and maintains the metre of Newman's original.

The steady house beat continues throughout so you'd never guess the unusual time signature unless you counted the beats in the riff.

We could have picked pretty much any track from Lamb's millennium-era album Fear of Fours. All of the tracks have noteworthy moments, utilising unconventional time signatures within an electro-jazz framework.

To single out just one, Five is ostensibly in 5/8 but adds an extra beat here and there to create some bars of the song that are in 6/8. Despite these unconventional measures, Lamb still manage to weave an intriguing slice of trip-hop with minimal drum and acoustic bass instrumentation.

3. Venetian Snares - Thank You For Your Consideration

The brain behind the name Venetian Snares is Aaron Funk, a man who delights in confounding his fans and foes alike with crazy time signatures.

Clattering breakbeats and Funk's wilful disdain for a straight-up groove mean that his music remains impassable for some. His penchant for throwing the kitchen sink at almost every track will be something you either love or hate.

It's hard for us to recommend a particular tune, so we've chosen his latest album as a good place to start. It's pretty accessible compared to some of his output and everyone from d'n'b fans to old-skool rave heads should find something to enjoy here.

We could probably debate for days about what time signature this worldwide smash is actually written in. Some say it's 11/4, others 4/4 with a deceptive cadence of 2 extra beats.

The beat count is 4 / 4 / 4 / 2 / 4 / 4 yet the phrasing never seems especially odd, a testament to how cleverly this track is put together and the performance of vocalist Andre 3000, which keeps the whole thing flowing.

Whatever your take on the music theory, it just works, and creates the most infectious groove in the band's history.

Give this track a spin and initially you might be fooled into thinking it's just another 4/4 drum and bass groove with the syncopated percussion that's typical of the genre.

In actual fact, though, this tune is in 7/8 metre. Dave Tipper is the mastermind behind this unusual production - no surprise given his reputation for blending genres and instrumentation. In fact, his Tip Hop album is widely credited as cementing many of the ideas behind the Glitch Hop genre.

We tip our hats, sir.

Another typical 4/4 tune right? Wrong. This lead cut from Spears' Circus album is actually far more interesting than that.

Quite a number of other pop hits pull off this kind of musical sleight-of-hand. including James Brown's Mans World and Alicia Keys' Falling, although these are both far slower than Britney's breakneck banger.

Despite the title, this is actually the final track on Jay Z's Black album and serves as a last shout-out to his Compton compadres.

It generously samples the main guitar riff from a late '60s track by Los Angeles Negros. His beats follow the riff and, as such, the waltz time of the original sample dictates that Jay Z's own version is in 3/4 time. This results in an unusual sounding waltz, one that you're unlikely to hear on Strictly anytime soon.

Although not common, there are a few other hip-hop tracks in waltz time - Kanye West's Spaceship and Heaven by Nas being two brilliant standouts.

True to their moniker, Leftfield have a habit of playing not only with interesting and unusual sounds but also rhythm and syncopation.

The title of this track from their second album makes their intentions obvious and is written in, wait for it, 6/8 metre. This dark and dirty cut is a pretty simple production and a great way to introduce yourself to the swinging world of 6/8. Its sparse percussion and obvious downbeat make it simple to hear what's going on with the unusual time signature.

This is another of those tracks where, at first listen, you could be fooled into thinking the whole thing is in 4/4. The instantly recognisable Eastern riff kicks off proceedings but is only played a couple of times before Q-Tip's lyrical flow takes over to a 4/4 backing.

However, once the riff kicks in again for the chorus, two extra beats are added. This results in a slightly lop-sided sounding 6/4 riff, although most listeners wouldn't notice as the 4/4 verse metre keeps the track grounded in familiar dancefloor territory.

Perhaps this classic track isn't what you'd normally classify as a 'dance' tune. But you can bet that, back in the day, plenty of people danced to it.

We simply had to include it as it's one of the best examples of a familiar song having some very unfamiliar time signatures but disguising them splendidly. The verses flit between 4/4 and 10/4, followed by a brain-bending 11/4 for the choruses.

When the track was more recently covered by Diana King she chose to drop one of the beats of the chorus (the 'will' of 'I will love you') to better fit a more modern reggae production style. Sacrilege.