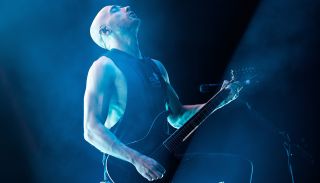 “It was a slow realisation, I guess,” answers Josh Middleton, when asked about the moment he realised Sylosis would definitely be making a return. In 2016, he announced the metal band he formed in Reading when he just 15 were going on hiatus, freeing up the time needed to join Architects initially as a live guitarist and, soon after that, as a full-time member. It was a move that – in the eyes of many fans – left the future of his original group shrouded in uncertainty…

“What a lot of people don’t know is that I split the band at the end of our last tour in March 2016,” explains Middleton. “I was really unhappy in the band and felt I’d boxed myself in musically. It was like there were all these self-imposed restrictions about what we could and could not be. So I basically told the guys I didn’t really want to do it anymore.”

As fate would have it some of the music heard on this year’s Cycle Of Suffering, was actually composed with a new project in mind – one free of the self-imposed restrictions that were getting in the way. There was just one problem: a lot of it sounded like Sylosis…

“I actually had the idea of starting a new band and was already writing music from a fresh perspective, then I realised it wasn’t too different to Sylosis – so I came back round to thinking it could work,” he laughs. “I guess I needed to think of it as a new band to realise I didn’t need to be worried about doing whatever I wanted. Just as I was beginning to come round to the idea of re-starting Sylosis, after amassing all these songs, a new path opened up for me in Architects...”

With Josh now dividing his time in two of the finest metal bands the UK has produced in the last 20 years, it's a well-deserved development for a player who has put countless hours into his playing. And he's got plenty of insight to share with you here.

1. Keep an eye on the angle of your wrist

“The main thing for me was learning Battery by Metallica and playing it over and over again, all day long. I remember when I couldn’t do that – and it was so frustrating. I realised a lot of it came down to your wrist angle.

"Some guitar companies make completely flat bodies with a low profile and a hipshot bridge, and you can’t quite get the angles you need unless you’re sat the right way. All of that stuff plays a big part in your picking. If you hold your wrist out straight, with your pinky at three o’ clock, then twist the pinky down to half four – that’s my starting point for picking.

"Whenever I’ve taught other guitarists who have been struggling with picking, I’ve noticed their pivot points were different. So some people need to readdress their technique, this felt like it was key – at least for me. I try to use my wrist as much as possible.”

2. Make sure you get enough rest after practicing

“I don’t know how true this is, but a friend told me that the drummer from Animals As Leaders [Matt Garstka] practices and then has a nap straightaway. Apparently it’s the best way for things to sink into your muscle memory, but I can’t be sure. I do a lot of practising at night, maybe while watching TV, so there could be some truth to it. Which ties into my next tip..."

3. Don’t put the guitar down

“Just always have a guitar on you. As long as you don’t annoy your partner or family, you can sit there hammering out scales watching TV. You don’t even need to hear it, you get your fingers used to whatever exercise or lick it is. It will always go in, even if you’re not really consciously practising and stuck into some movie or TV show.”

4. Practice unplugged as well as with distortion

“That’s a big one for me. When the distortion is on, there can be all these unwanted string noises and scrapes that you might not be aware of. I think people need to practice in two different ways – with an amp, using a lot of gain, but also with a totally clean sound or not plugged in at all.

"If it sounds clean unplugged, hopefully it will sound clean distorted… but you have to be used to playing distorted so you’re muting your strings properly and not getting unwanted noise!”

5. Experiment with starting licks on an upstroke

“I learned a lick about four years ago that’s basically a pentatonic run going from the higher strings to the lower strings. And the guy doing the video said he was starting on an upstroke because it made sense direction-wise.

I’ve always liked the sound of picking every note but being so used to starting on a down, it felt like a huge adjustment for a descending run. I tried it and it took 20 minutes to get into my muscle memory. It sounds harder than it actually is.

"So now, whenever I’m using two, four notes per-string – or anything with an even number – I start on an up. That’s one of the newer parts of my playing. Back in the day I used to practice those Zakk Wylde two-note-per-string runs, and having switched to this style of picking I’m finding it cleaner and easier.”

6. Remember the importance of mic placement

“The main reason I use a Kemper live is that – as well as saving my own tones – I could make sure I had the perfect tone every night, without worrying about mic placement at a festival with 15 minute changeovers and stage hands plonking 57s wherever in front of my cabs.

"Anyone experienced with recording will know that millimetres from a cab, especially with V30s, will make an enormous difference. It’s easy to forget the main portion of your tone will come from the mic and the cab.

"It doesn’t even matter what amp you’re plugged into, if the cabs not mic’d up well, it might sound bad. The Kemper makes sure we always have a great sound.”

“I produced and mixed the new album myself because I’ve gotten more confident over the years. I know what I want – so now I don’t want to hassle other producers and drive them insane trying to get the sound I’m hearing.

"I took the time out to learn how to mix a bit better. There’s a technique championed by producer Andy Sneap which uses a C4 multi-band compressor, working only on the low-end around 150 to 200Hz. That makes sure whenever you do a chuggy palm-mute and there’s a big spike in the lower frequencies, it knocks it all down and still the rest of your tone remains unaffected.”

“Guitar players need to be equally focussing on rhythm, if they’re interested in lead playing. Especially in Sylosis, both tie into the same thing. There’s a really intricate run in I Sever that’s really fast, but it’s still a riff. It’s essentially the same as lead playing - it has to be tight and match up between all guitarists. I quad track guitars, two on each side of the mix, and they have to be tight with each other.

"Your timing has to be great - and I generally find players more focussed on lead playing tend not to have great timing or clean rhythms. They might not have a developed down-pick, which is crucial for that tight metal sound – it’s more mechanical and that’s intentional, I like it to sound mechanical."

"It’s better not to view lead and rhythm as different things, or focus too much on either. If anything, I’d say just focus on rhythms but because a good rhythm guitarist will become a good lead player naturally, whereas being a good lead player might not mean you’re good at rhythms. It’s all about building up that strong right hand, it’s the most important thing in metal styles of music.”

“A lot of guitar players want to skip as many steps as possible and play Paul Gilbert licks just like he plays them. But shredding through things quick like that might mean you’re not that tight or clean.

"What a lot of people hate doing is practising really slowly, but that’s actually how I spend most of my practice time. It’s all really boring slow speeds and picking every note assertively. I keep going round and round again, I don’t try to speed it up. I feel like if it’s clean and tight slow, you will get to where you want to be - it won’t take that much longer but you’ll be better for it.

"A lot of people tend to practice at the speed they want the lick to be and that won’t help them improve or isolate the weak points in the playing. Practising slowly is the key and if it’s boring, do something else at the same time. It will be more beneficial than going fast.”

The new Sylosis album Cycle Of Suffering is released 7 February and you can preorder it via www.sylosis-band.com. The band play London Islington Assembly Hall 13 February.