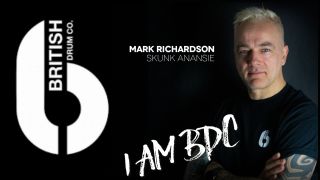 Mark Richardson - who joined Skunk Anansie after the release of debut album, Paranoid and Sunburnt, started his career in UK hard rock band, Little Angels, and post-Little Angels project, b.l.ow. before taking the throne in Skunk Anansie. He has since gone on to record five albums with Skunk Anansie, as well as being a full-time member of Feeder between 2002 and 2008, recording drums on Comfort In Sound, Pushing The Senses and Silent Cry.

In addition to this, Mark has performed a number times as a session drummer for Amy McDonald, Sunna, Mel B and solo projects from his Skunk bandmates, Ace and Skin.

Mark’s hard-hitting style and sense of playing for the song has made him a firm favourite of the UK rock scene over the past 25 years, and of the move to playing BDC drums he says:

“The innovation, attention to detail and care which goes into each and every part of a British Drum Company creation is staggering. I am grateful to be associated with a manufacturer whose contributions to innovation are vital to the worldwide drumming industry. I’m excited to be joining a roster of phenomenal talent, honoured to be standing on the shoulders of a talented and exceptional team of craftsmen and women and humbled to be accepted as part of the BDC family”.

Keith Keough, British Drum Co.’s CEO adds, Mark has been on my radar for a long time. He’s a huge character within the industry and a fantastic drummer. To sign such an artist is a huge step for us and I warmly welcome him to our ever growing roster.”