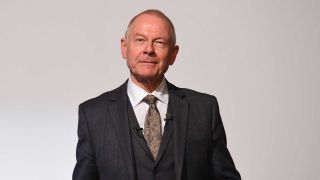 In the age of oversharing, Robert Fripp is the last great rock ‘n’ roll enigma.

His hallowed surname graces the credits of some 700-plus seminal releases, amongst them King Crimson’s In The Court Of The Crimson King, David Bowie’s Heroes and Porcupine Tree’s Fear Of A Blank Planet.

His renegade guitar technique drips down into the palettes of players as disparate as Kirk Hammett and Annie Clark. And yet – thanks to Fripp’s half-century habit of killing his bands, scorning the music business and ducking the live circuit – the 72-year-old is the least-spotted of cult heroes.

Until now. Considering that King Crimson didn’t tour on home-turf between 1982 and 2015, the prospect of watching the fabled British prog-rockers play three nights at the Albert Hall this summer is both mouthwatering and faintly surreal. Will Fripp give promotional interviews? Don’t hold your breath.

Like his old compadré, Bowie, the guitarist knows the best publicity is none, preferring to leave journalists to follow the breadcrumb trail of testimony from the musicians in his circle of trust, and unpick a character described by former Crimson drummer Bill Bruford as “one part Joseph Stalin, one part Mahatma Gandhi, one part Marquis de Sade”.

But who is the real Robert Fripp? Suited and professorial, bespectacled and perched expressionless on a stool, the guitarist is nobody’s idea of a stereotypical axe hero. But then, he never was. Fripp’s sleepy West Country upbringing suggested nothing more racy than a future career in his father’s estate agent business, but the formative influences of Hendrix, The Beatles, John Mayall, Béla Bartók and Antonin Dvořák put him on a different track – and he didn’t let a litany of musical handicaps put him off.

Hard to believe, Fripp was tone-deaf, had no rhythm and chose to play right-handed despite being a leftie: drawbacks that would have seen him hopelessly outgunned by the blues galacticos of the ’60s. But for what he had planned, his off-kilter approach – built on the crosspicking that became his signature – was perfect.

King Crimson emerged from London’s melting-pot music scene late in 1968, with Fripp lining up alongside lyricist Peter Sinfield, utility man Ian McDonald and drummer Michael Giles, with Greg Lake on bass and vocals. But you only had to hear the following year’s debut album, In The Court Of The Crimson King, to identify the guitarist as the driving force behind this leftfield outfit.

That debut album did business on both sides of the Atlantic, but in the first flash of a career-long distaste for commercial success, Fripp allowed the lineup to disintegrate. Lake went on to the more lucrative Emerson, Lake & Palmer, while the guitarist’s growing dominance was palpable in turn-of-the-decade releases like In The Wake Of Poseidon and the classical-meets-jazz of Lizard.

By 1971’s Islands – an album influenced equally by Miles Davis and ancient Greek poet Homer – Fripp was the uncontested leader, with a reputation for an iron fist. “When I read interviews with old King Crimson bandmates,” he reflected in a rare soundbite, “they suggest the difficulty lies with me. I agree with that. I’m a very difficult person to work with.”

It’s likely that no band has ever split and reformed more frequently, spat out more players or covered more musical ground than King Crimson. By 1973, only Fripp remained from the original lineup, but the period’s acclaimed studio output suggested that omnipotence suited him: it’s still a thrill to hear his buzzsaw guitar scythe through the string section on the title track of Larks’ Tongues In Aspic, his fearless improv on Starless And Bible Black, and the brutally heavy riffing of Red.

Patently, Fripp had too many ideas for one band to contain, and when Crimson split in 1974, the guitarist became a trophy session man to the era’s sonic mavericks. Most groundbreaking, perhaps, was his partnership with Brian Eno, the pair’s double-header releases like (No Pussyfooting) and Evening Star birthing the Frippertronics looping technique that used twin reel-to-reel tape recorders to create cascades of sound. But his closest brush with the mainstream arrived in 1977, as Fripp supplied the glorious sustained swells on the anthemic title track of Bowie’s Heroes (the ever-precise guitarist placed tape strips on the studio floor to show where to stand for the best feedback).

Three years later, Fripp was recalled for Bowie’s Scary Monsters (And Super Creeps), supplying brilliantly gonzoid fretwork on classics like Fashion. But the guitarist was nobody’s gun-for-hire, and another unrecognisable incarnation of Crimson emerged in 1981, with the polyrhythmic experimentation of the Discipline album driven by a new lineup in which Adrian Belew’s wild fretwork challenged Fripp as the dominant force. “We were trying with our interlocking guitar style,” the newcomer told MusicRadar, “to have a sound that actually matched in some ways.”

Over the decades that followed, plotting Fripp’s trajectory was a fool’s errand. In 1985, he founded the Guitar Craft school that imparted skewed wisdom including his favoured New Standard Tuning (CGDAEG). By 1994, he had hooked up with electronic duo The Orb, and resurrected Crimson in the ‘double trio’ format of two guitarists, bassists and drummers (try the Vrooom instrumental, from 1995’s Thrak, for the best example of the lineup’s power).

“He never specifically tells the drummers what to do,” Pat Mastelotto told MusicRadar. “He’s like a casting agent. He puts a couple of personalities together. It was obvious with Bill [Bruford] and I that I was the more foundational rock drummer and Bill would be the more skittery rhythm terrorist.”

Likewise, there’s little point predicting which version of King Crimson will take the stage in London this summer, which corners of the 13-album catalogue will be explored – or what mind-expanding magic the talismanic guitarist will conjure from his instrument.

After all, if the life and times of Robert Fripp have taught us anything, it’s to expect the unexpected, especially onstage. “Performance, for me, is where the juice resides,” noted the guitarist at the press conference that will most likely be the only publicity for the tour. “King Crimson has always been a hot date. It’s always been a live event…”