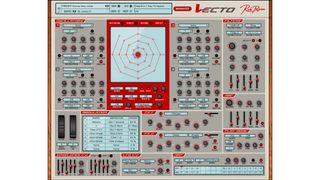 Originally released as a Reason Rack Extension, Rob Papen’s Vecto is now set to weave its tangled web of sound as a VST/AU/AAX plugin.

This is a four-oscillator vector synth that enables you to draw in vector paths to shape the sound. You get a wide range of oscillator waves to work with, as well as sampled waveforms, modulation options and preset vector paths.

Vecto promises to cover lots of sonic ground, and you can hone your patches using 28 types of filter and two effect processors. An arpeggiator is included, too, as are more than 1000 presets.

Available now for PC and Mac, Vecto is being offered at the introductory price of $79/€79 (regular price will be $99/€99). You can also download a demo version. Find out more on the Rob Papen website.