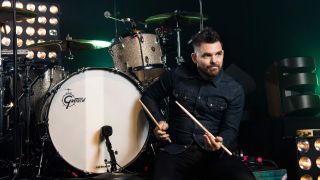 Back in 2011, a hungry band from Long Beach, California, played their first London show at Camden’s Barfly.

Jump forward eight years and Rival Sons are headlining the Roundhouse. Hailed as the future of rock, the band is on the road promoting their sixth album, 'Feral Roots', when Musicradar sits down with Michael Miley.

The drummer played jazz as a teenager (he has hearing damage from sitting too close to Tony Williams at a gig!) before studying at California State University At Long Beach, where he performed with the Steel Drum Band and Samba Band, which led to him sharing a stage and microphone with Carlos Santana.

“We played the Miami Orange Bowl and opened the show for Carlos Santana,” says Miley. “I remember looking out at a football stadium like, ‘This is where I belong.’ Then, at the end, Santana invited us out to play percussion. I played bongo bell on ‘Oye Como Va’. Carlos was singing, so I went up there and sang on the mic with Carlos. I was twenty-three, so green and bright-eyed.”

While he still loves to throw some Samba into his drum solos, Miley’s playing in Rival Sons is inspired by the titans of classic rock drumming. “Keith Moon for the energy,” he says, “Ringo Starr for song structure and playing good parts, John Bonham for the bombast, the feel and the funk, the ghost notes and the hi-hat barks, and then Mitch Mitchell for the rolls and the paradiddles. Those are my guys.”

Rival Sons has opened for bands like Judas Priest and Black Sabbath, but you’re not a metal band?

“I call what we do Maximum R&B, that’s what The Who called themselves. Rock ‘n’ roll really is Rhythm and Blues, it comes from Chubby Checker, Fats Domino, Little Richard, Chuck Berry, that’s the original soul music. When you get the British Invasion influence in there, it turns into Maximum R&B. We’re loud, but it’s not hurting your ears loud.

"Everybody has really good tone. We did thirteen months with Black Sabbath, they’re the definitive heavy metal band. We do get weird pairings, but then who is playing classic rock ‘n’ roll like we’re doing? Greta [Van Fleet]. Bless them, they’re the only people trying to wave that flag. I’ll leave it at that on those guys.

"Microsoft needs Apple, Apple needs Microsoft. You need competitors for good business. We don’t have any contemporaries, really. The Sheepdogs do really well in Canada, there’s Monster Truck over there. Vintage Trouble had a little bit of recognition, but nobody is really waving this flag.

"I feel like the greats, Deep Purple, Black Sabbath, Judas Priest, KISS, Lenny Kravitz, Guns ‘n’ Roses, AC/DC, we’ve literally been passed the torch from all of them. We were initiated into the lineage.”

What was your goal when you graduated college with your music degree?

“My goal was to get in a rock band, get a record deal, tour the world. That was the general, foggy idea. I got out of college and was living in Long Beach. The Long Beach music scene was pretty pumping at that time and I got into a band called Shave, it’s punk-funk, they’re the definitive Long Beach sound, good friends of mine.

"They wear different costumes every gig, so I really came out of my shell as a performer with those guys. Then I met Bird [Bernardo Targett] and moved to Hollywood and we got signed to Immergent Records, we called the band Bird3. Pretty much a year out of college, I was signing a record deal, so I got my wish.”

Did everything happen quickly when Rival Sons formed?

“When the band formed Jay [Buchanan, singer] was signed to a deal, Scott [Holiday, guitar] was signed to Atlantic, I was signed with Bird, we all had individual followings, so when we put this band together, the perception was that it was this little super-band from the Long Beach area.

"Jay is an exceptional singer, anyone listening to Rival Sons would know he’s probably the best male rock vocalist on planet Earth right now, Scott is the tone-master fuzz-lord, and at the time we had this full jazz guy on bass, I will intentionally leave his name out. Our first gig was one hundred people in Orange County.

"We played The Roxy and it was sold out, then we sold out two nights at the House Of Blues the following month, so we had this buzz.”

The band writes in the studio, which is very unusual nowadays!

“Super weird, yeah. Your first instinct tends to be the right one, so before we went in on our first album with [producer] Dave Cobb, he said, ‘Whatever you guys are working on, drop it. Bring in some of the riffs but no form, we’ll put everything together in the studio.’ All righty, I’ve never done this before.

"Then you realise a song is just four bars for the verse, play that twice, pre-chorus is two bars, chorus is eight bars with a three-bar extension. There’s no reinventing the wheel. We’ll record these awesome riffs and put them together.

"All the great bands did that. You listen to old AC/DC, they didn’t overthink anything. Even Zeppelin, Hendrix, Small Faces, Cream, when you listen to the recordings, nothing sounds like it’s so pretentious and overthought, like they spent thirteen months on a snare drum sound. Some of them it sounds like they just put one mic up, ‘I guess that sounds good,’ but they’re using a Neumann through a Fairchild, yeah that does sound good.

"That’s our ethos - the first instinct, from the gut. There are mistakes, it gives it a confrontational feeling. Sometimes you’re pissed, like ‘I don’t know what to play!’ Meanwhile Dave Cobb is recording it. ‘I got it, you guys come on in and listen. I’m going to piece this thing together.’ Cobb would take that eight bars, then that eight bars, that eight bars, and literally we’re doing different takes without a click track.

Once the album is done, do you have to learn what you did in the studio?

“We’ve done tours where we didn’t do a rehearsal on an album cycle. We just go right in for full-on gigs. You learn onstage really fast. Right now, we’re on our sixth show of this album cycle so we’re still making adjustments.

"Every soundcheck is like a rehearsal but once it starts getting under everyone’s belt, we’ll intentionally not soundcheck sometimes just so we go in cold. Our ethos is to be loud, proud and loose. Scott and I, he felt he was a little ahead of me, I’m like, ‘That’s what makes it sound great, dude.’

"When you hear Page ahead of Bonham, there’s that tension and then they pull back. Back to your question why we write and record in the studio, there’s an urgency in the music, and we’re not playing to a click so the fills, the licks, are what we wrote that morning.”

Dave Cobb is mostly known as a producer for Americana and Country artists, what makes him the right guy for Rival Sons?

“He gets our sound, he’s like our secret fifth member. If I may use the analogy, he’s like our George Martin. If it ain’t broke, don’t fix it. Jay is very picky on who he wants to work with, so the fact that Jay loves him so much is testament to him. He’s an amazing guitar player, he’s just like Scott, they’re tone nerds.

"They’ll sit around talking about pedals - they know the pedal, the amp, the signal path that Jimmy Page used on the ‘Heartbreaker’ solo. They’re that specific. Every session I did before Rival Sons, everyone was trying to contain me, I was always like an animal in a cage at the circus. ‘Too many fills, Miley. Can we just get a pass with no fills? Just give us two and four, meat and potatoes.’

"I’ve just never been able to do that. I lived in Hollywood for eleven years, I was never a real first-call session guy, although I did get a call to go on a writing session before Matt Flynn joined Maroon 5. Their first drummer got tendinitis in both his wrists on that first album cycle, they were playing all over the world and the guy couldn’t even hold drum sticks anymore. James Valentine, the guitar player, called me for a writing session and I had another recording session that day.

"I said ‘Can I come later or can we do it tomorrow?’ He said, ‘No, we booked the studio just for today until six o’clock.’ I wasn’t getting out of my session until six o’clock, I was like, ‘I guess this isn’t in my cards.’ But then in Maroon 5 I’d have to be playing meat and potatoes more instead of going apeshit like Keith Moon. I’m more Keith Moon than meat and potatoes.”

This band certainly gives you room to play!

“That’s back to Dave Cobb. Doing the 'Pressure & Time' album, when we were doing ‘Before The Fire’, he’s like, ‘The last two choruses at the end, do a fill on every bar. Go completely bonkers, do your thing, man.’ Cobb gives me that freedom. And Cobb is really song-oriented, he’s got an insane sense of melody, he helps Jay write melodies and lyrics. Jay writes 97% of the lyrics but Cobb will be like, ‘That word sucks, dude.’ That’s what Jay loves about him.

"He’s not afraid to say something sucks which is great. Cobb will go, ‘No, man, that sucks. What would Keith Moon do? Do that!’ And then he’ll walk away. All right!”