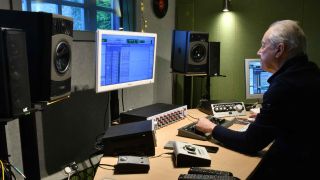 “The whole process of production is this wonderful, delicate balance between technology, business and creativity,” says Tony Platt, and he should know.

Right from the start he’s been witnessing at close quarters artists of the calibre of David Bowie, Marc Bolan and Led Zeppelin, recording classics like Space Oddity, Get It On and Stairway To Heaven, early on in a career that was inspired by a love of music and a formative visit to BBC Radio One while still at school.

“You have to stop yourself tipping too far one way or the other,” he continues. “If you get too obsessed with the technology, the creativity will suffer. Or if you’re highly creative but ignore the business, and don’t get yourself organized, you’ll find yourself in a situation where you’ll end up having to pay too much attention to the business side and creativity will suffer as a result. Getting that balance is difficult, but it’s essential.”

His current home mixing studio domesticates five decades of experience around the best studios in the world. So, when he offers opinion on just exactly what this damned recording thing is, you listen.

Perhaps Tony’s most famous recording sessions as a young engineer would be his work on Bob Marley’s breakthrough albums Catch A Fire and Burnin’, as well as both Highway To Hell and Back In Black for Scots-Aussie rockers AC/DC. With full production credits later ranging from Cheap Trick to Iron Maiden, no wonder he’s become a leading light of the Music Producers Guild, a professional meeting point for the best in the biz.

Over the years he’s evolved a very deep understanding of musical creativity and has almost come to regard the song as a person, and the recording of the song as a portrait of that person at a specific age. Other portraits may be taken, of course, but the song continues to mature…

“One of the biggest problems songwriters face is that songs, really, should never be finished,” he says. “You write a song, and when you record it you take a snapshot of it at that particular moment in time. But then you take it on stage and it changes.

"I’m not a big subscriber to the Dire Straits ethos of standing on stage and playing the album note for note, word for word and sound for sound – to the extent that you might as well have a CD player on stage instead of a band.

“When you take your songs out on the road they continue to grow and develop, and a recording is not the definitive statement. As a producer I regularly listen to albums I worked on and realize how I could – and maybe should – have done some things differently.

"The challenge is to get it to the point where it is commercially viable and releasable – as finished as it can be at that point. As you go forwards, it won’t be finished any more. And that’s as it should be, because if you’re saying it’s absolutely perfect, locked off, done… quite honestly, I don’t think that exists.”

Tony may be one of the country’s leading producers of other artists, but we all know that many a Number One has been made in the bedroom – and, says Tony, the same rules apply.

“Self-producing artists have exactly the same challenge as professional producers,” he continues, “but what they need to do is surround themselves with a really good team of people that take care of the areas that either they don’t want to do or aren’t particularly strong at.

"That in itself is a skill – think of people like Prince, who managed to create this amazing support for himself, from building the studio to handling the accounts! He just drifted in and out making music, but it didn’t happen by accident.”

Working with such a who’s who of popular music, including a long stint at the legendary Island Studios in Notting Hill, West London where he graduated from tape op to engineer and producer, Tony has developed an instinct for what make the music makers tick. All artists, he says, need to believe in themselves without losing touch with reality.

“We come up against artists who want all the control, but eventually it dawns on them that, if they finish the project, they’ve got to let it out into the big, wide world and be judged on it. Then they panic!

"Those are the ones who tend to fall by the wayside because they don’t have that extra little bit of self-determination to take it to the finishing line. It takes a huge amount of courage, and I’ve always said I have the greatest respect for artists who, basically, put themselves completely on the line and open their souls to the world.”

His new mix room has a pretty serious Pro Tools rig, along with gorgeous PMC monitors and a whole host of hardware and software toys. Favourites include the Rupert Neve Designs summing mixer and the many UAD plug-ins with their Octo Cards, balancing analogue and digital in the way nature intended.

Another key album in Tony’s career was Foreigner 4, which he engineered in New York for producer Mutt Lange. It’s a good example that reveals another truth about recording music… “Mutt wanted the perfect sound, the perfect performance and the perfect feel – on everything,” Tony reflects.

“They were great musicians, but sometimes one note would be out. So, I would edit in a replacement: perfect, but not 100% authentic. The point is, at a live gig it doesn’t matter, it’s gone. In a recording, you have to re-live the mistake every time you play it. That’s the decision you have to make.”

Tony is known for rootsy blues and reggae productions too, warts and all in some cases. But the final choice is yours. Heaven or hell; stairway or highway… just keep going in your own direction.