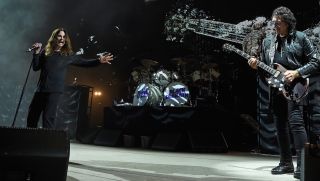 They don't call Tony Iommi Iron Man for nothing – he's overcome career-threatening injury and cancer in his life, keeping Sabbath going through every adversity thrown at them. And now it seems, despite their ups and downs over the years in the band, even Ozzy Osbourne is in awe of the guitarist

"He was the band, really," Ozzy told Rick Rubin on the producer's Broken Record podcast. "We were all part of the band, but he was the most irreplaceable one [out of all of us].

"People will say to me, 'Why did you always sing on the side of the stage?' I don't fucking know. I don't know. It's just fear, I suppose.

"'Cause Tony, he's one of the few people who could walk into this room right now and I would fucking feel intimidated. He intimidates the fuck out of me - and he knows it."

And it's not surprising he considers Iommi – the only constant from the original lineup in Sabbath during its many incarnations – the indispensable member.

"Geezer's [Butler, bass] a great, great lyricist - nobody can touch him," admitted Ozzy. "Bill [Ward], in his day, was a great drummer.

Tony Iommi interview: “None of us were brilliant musicians but as a band it worked”

"Tony , he's always gonna be the greatest - no one can touch him. And actually, to this day, I still don't understand how he plays guitar, 'cause he's got no fingertips; he plays with plastic fingers.