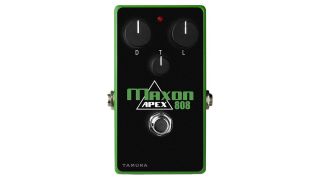 NAMM 2020: Maxon has revealed that it tasked original Tube Screamer designer Susumu Tamura with creating the ultimate new version of his much-imitated overdrive pedal – the results of which it has dubbed the Apex808.

Tamura reportedly took his assignment seriously, spending three years combing through 100 plus takes on the Tube Screamer – both vintage and contemporary – in an effort to determine the key components in the best examples of that iconic solid-state circuit.

The result is Maxon's new Apex808, which builds on the company's heritage as the original producer of the pedal (first called the Maxon OD808, before it was rebranded to the TS808 Tube Screamer under license to Ibanez).

Maxon says the key to the Apex808 Overdrive's ability to capture that much sought-after vintage Tube Screamer sound in a modern production is reportedly an (unnamed, alas) brand of chip that was produced in a specific time period.

Having discovered its importance to the circuit – specifically the chip's clarity, which Maxon boasts makes "other drives sound as if they are being played with a blanket over the speaker" – Tamura set about sourcing more of the component for the Apex808 builds.

Price and ETA for the Maxon Apex808 have not yet been confirmed.