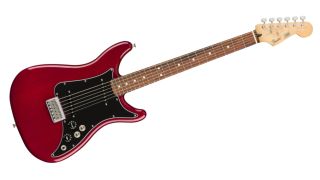 The original Lead hit the stores in 1979 and the model remained available into 1982, before it was discontinued. The idea of the Lead was to meld a Strat-like neck with the hardtail, through-body stringing of the Tele and add some different control configurations, in order to give players a new flavour of Fender at an affordable price point.

The Player Series Lead III [above] – offered at the same price – is inspired by the last available Lead guitar and switches out the singlecoils for an HH setup, with toggle switches that offer pickup selection and coil-splits and is available in Olympic White, Sienna Sunburst and Metallic Purple.