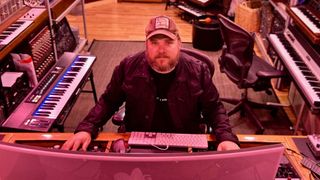 Famed American producer and keyboardist David Baron has worked with everyone from Brits like Bat for Lashes and Jade Bird, to acclaimed American artists like The Lumineers, Lenny Kravitz, Shawn Mendes and Meghan Trainor.

"The ARP 2500 is a work of art. Released in 1970 to go head-to-head with Moog modular system, ARP went a different route with patching; the unique slider matrix. This makes it a lot easier to route a voltage to multiple places.

"It gets rid of the confusing Moog system of S-trigs and voltage control. The oscillators are much more accurate as well – they actually stay in tune! Quite a feat for oscillators of that era.

"The multimode filter is one of the best sounding filters ever made. Beautiful, accurate, creamy filtering. I have used it on non-synth audio in mixes as a high-pass. It does something magical. The low end on the synthesizer is solid and awesome.

"All in all, one of the best sounding synthesizers ever made. "

"We have become used to digital recreations of plate reverberation in the modern era. Some of the digital emulations sound fabulous, but there’s always something missing – a depth, a complex feel.

"The more you throw at the EMT, the more interesting the interactions become. It can create a whole sonic world by just combining elements to it. I prefer the smaller 240 to its larger brother the 140.

"The sound is more defined. It has less low end, which works out to be best most of the time. I would love a plugin that accurately emulated the 240!"

If monitor speakers are our sonic lens to the world, the ATC 110s are like wearing the Hubble space telescope! They are highly accurate and emotional. You really feel the music through them.

"I mastered a record recently at Sterling Sound and all of their rooms have a version of the same monitors. It is one of the few monitors that can be found in both the best mastering and recording studios. That says something.

"They inspire you to do your best work. They also rock. You can turn them up and musicians lose their mind while tracking. Soft or loud, they are an absolutely invaluable tool."

"Soundware for samplers is a dark art. You can play something that sounds amazing on its own, but find it doesn’t work in any mixes.

"Sometimes the strangest samples work – I still use a low memory crescendo sax sample from my Akai S1000 days. That magic baritone sax sample has appeared on two of the biggest hits I worked on.

"There is an intention to playing, recording, and programming sample libraries. Spitfire consistently makes libraries that sound like what we do in the studio if we had the best players, the best mics, the best producer, and time.

"Kudos to them as I know it is an insane amount of work based on getting the best people and technology together in an artistic way."

"I was late to adopting the 500 series as a way of working. My last recording studio had a vintage Helios console and was built around high-level audio minimalism. Many of the first 500 series modules I tried were less impressive than their rack-mounted equivalent. But I travel a lot, so I could not ignore the allure of the 500 series.

"Neve has hit it out of the park with the 535 because it has the soul of the retro gear we love, but with modern size, heat, and utility. It adds a vibe to anything you run through it. I used a console of their design recently and will be adding some of their channel strips.

"I cannot believe how good their new gear is. It’s like the vintage stuff, but better."

"This is a crazy Swedish microphone with a square capsule. I first read about it in connection with Jeff Buckley’s album Grace.

"It is one of the best vocal microphones I have ever used. It frequently wins out against my vintage tube microphones.

"Milab is supposedly working on an updated model with less self-noise and better overall specs.

"I look forward to that. It’s a sleeper!