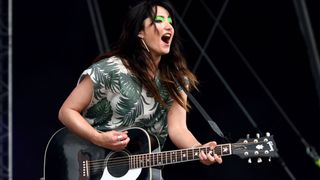 The last time this writer spoke to KT Tunstall, back in 2013, she’d been recording with Giant Sand and studio eccentric Howe Gelb in Tucson, Arizona, channelling her in her inner-analogue junky and getting quiet and introspective. Her latest album, 2018’s Wax, couldn’t be further removed from that.

The boisterous, electric-laden rock ’n’ roll collection was recorded with Franz Ferdinand man Nick McCarthy in his garage studio. The album’s physicality is appropriate, given it comes as the second part in Tunstall’s soul, body and mind trilogy, following on from 2016’s Kin.

What made you focus on this concept of the soul, body, and mind for these records?

“I think the reason I wanted to do this was that I come to realise that my creative brain responds very well to pressure. [That] and I’d gone through quite an unexpected hiatus of being hit with these very life-changing things, where my dad had passed away and I got divorced and sold everything I owned and moved to America, moved to Los Angeles. And I kind of, at that point, felt that maybe I was done with making records for a while. I just didn't feel inspired by it. I think I just felt, probably just emotionally, a bit spent.

“I think the trilogy came to me after meditating in a park in Nashville, and meditation had been an important part of getting healthy spiritually, emotionally and mentally after those big things happening to me. I realised that album [Kin] is all about the spirit and all about overcoming really difficult things – and not only being proud of myself for getting through it but actually being really grateful for it. Because it turned out I learnt a lot more about myself… and that those difficult moments are really the important ones.

“I was talking to someone the other day and they said, 'Did you know that the word crisis, its original Latin meaning is ‘decision or opportunity’.' I thought that was just fantastic of reframing something that is kind of inherently feels quite negative, as a pivotal moment in your life where you can decide how you react to it, and really the moment where we show who we are, is in how we respond to these things that happen to us and what we do with it. The really great thing about being a singer/songwriter is that you can actually use these things to make something.”

Yes - and there's a catharsis in that process.

“You can literally turn shit into gold! It's brilliant, that's what happened with that one and I was really inspired to make a rock record next. I’d written this song called The Healer which had been on the EP, The Golden State and it ended up being this closing song in our set during festivals, even though people didn't really know the song. There's just something about it that's just very liberating and wild. Playing that song just makes me want to trash stuff.

KT Tunstall: the 10 records that changed my life

“It felt amazing and it awoke something in my audience that I think maybe they had been wanting from me for quite a long time, and I hadn't quite delivered that level of emancipation through noise and attitude, and so that song got re-recorded for that record, and electric guitar became very central to the sound. I thought, ‘Well, the electric guitar is such a physical instrument for me, and I really love the idea, so this vision came after meditating, of making these three records and exciting myself by setting myself a challenge basically.”

Why is wax a term that's representative of the body in this trilogy?

“Well, with the trilogy I wanted to make three records, all with three-letter titles, and I'd read a really great book called Secrecy by Rupert Thompson, which was about 17th-century Florence, and this sculptor who is very clandestinely commissioned to make a full-size wax sculpture of this royal figure's wife, who has left him. It was actually illegal to make full-size wax figures of people because, and this is true, they thought it was very sacrilegious at the time because you were playing God, because they looked so real.

“Then there's all these other contexts that wax links us to like candle light, there's nothing like it, no-one has been able to re-create candle light with electricity. Bees and beehives, and hive mentality and then obviously the total weirdness that we just create wax inside our heads, and no-one talks about it, because it's so weird, so like earwax is almost this taboo thing that no-one wants to talk about - and everyone knows what it fucking tastes like!

“It's really odd, and so it's this very ancient physical, tangible substance that has all these quite mystical fronds of meaning and uses. Also, you know wax melts, so the word for me included the inherent decay and flaws of being human.”

What was the key to bringing that concept - the ‘aliveness’ - out in the music itself?

“I think a massive part of it is how you record it. I'll often be so frustrated, and it still happens, when people will see me live, and go ‘I like your records, but your live show is fucking great’ and I go… ‘Goddamn, why can't I get this energy onto records?’

“It's tough; I've always found translating that live energy and the way that I deliver the songs with an audience in a live setting really difficult to capture. It's lightning in a bottle, and I just really felt like this record is the first time I really did it, and it really speaks to me of how I play live.

“And that was really going back to basics when I was working with Nick McCarthy in his studio - and he's just got a garage studio and the guitar amp’s in the toilet and he's in the drum room with the drummer, and I'm not wearing any headphones, I'm just listening to the bleed out the door. It felt like we were playing a gig, you know? It was just a fantastic way of making a record. It was very quick and raw.

“I think also setting that theme for myself, I really like puzzles. It's much harder for me to write music when there are absolutely no parameters at all, so I think setting myself that framework of what I wanted to do and being interested in making an electric guitar record pushed me to actually improve my own electric guitar playing, so it was challenging myself to play some riffs that were pivotal to songs like Human Being. It's not natural for me to play lead guitar parts.”

In terms of the gear you used, was there anything that was particularly important in the writing or recording for you?

“Working with Howe Gelb in Tucson, Arizona for that fourth record really opened me up to using effects on my voice. As well as opening up opportunities with my guitar setup. He plays solo quite a lot, and he's great at using weird vocal effects, and delays and reverb and chorus and all sorts of different things, and he uses quite old gear. It's quite a vintage sound he gets a lot of the time, so it lead to me expanding my pedalboard quite a lot.

“I work quite closely with Roland, they're brilliant. We sort of teamed up and I'm also using the TC-Helicon. so I’ve been doubling the vocals for choruses and things like that and when I'm playing solo and that lends a kind of thickness to the sound. I've also teamed up with Supro that’s been really cool - they make great pedals as well. I use their overdrive and their tremolo pedal, which has got a beautiful grittiness about it and the guitars are just great - they've really got teeth.”

Your thoughts must be turning now to the final part of this trilogy. How far along are you with the ‘mind’ stage of it, the finale?

“I’ve certainly embarked on it for sure and there's definitely some ideas that I've had over the last few years that I want to expand. Because it's about the mind, I do like the idea of concentrating on patterns and looping and syncopation and duality – having more than one thing going on at once…”

Essentially, just creating a massive live headache for yourself down the line, then…

“Just a big headache, yeah! But it's a really, really fascinating project. One that I constantly find engaging. The ability to physically rebuild neural pathways, and think in different ways, and the biological possibility to rewire your own brain using the same brain that wired itself… It's just fascinating. So I don’t think I'm gonna be short of inspiration when I really knuckle down and get it done.”