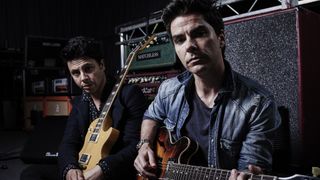 WORLD GUITAR DAY 2017: Stereophonics are currently riding high with their tenth album Scream Above The Sounds, the fourth album to feature touring-turned-full-time guitarist Adam Zindani. For both Zindani and ‘Phonics frontman Kelly Jones, the guitar was a means of escape from their humdrum, working class upbringing and a tool to make otherwise geeky teenagers appear cooler.

In celebration of World Guitar Day 2017, we sat down for a brief chat with the pair to find out how they both discovered the instrument, what it means to them and why they reckon you’ll never be lonely with a guitar.

What attracted you to the guitar and how did it make you feel?

Kelly Jones: “My old man left a nylon string guitar under the couch in a box. It was £10 and I looked at it for a year and then one day I said, ‘Can I have some lessons?’ His mate was a guitar player and when I started lessons I was really frustrated, but then I got to grips with it. My street got flooded and all the water came in my house and I remember chucking my schoolbag in the water but putting that guitar on the highest wardrobe in the house!  At that stage I knew that it meant something to me.

“I always remember my old man saying to me, ‘If you have a guitar you’ll never be alone’ and I thought that was a very dramatic thing to say to me, but now that I’m 43 I’d be fucked without that thing. Because it’s the one thing you can rely on every day. No matter what’s going on, you pick that up and all of a sudden everything feels alright. So it definitely does that for me.”

Do you still feel that way about it now?

“There’s not a day I don’t pick the guitar up three or four times. The only time I don’t pick it up is when I finish an album tour and I need to write the next album. Because the longer I stop playing, the longer [the guitar and I] have a face off, then when I pick it up shit happens with my hands that I’ve never done before because I’ve forgotten how to play. And that’s the only time I leave it for maybe a month and a half. I don’t know why but when you do pick it up, you like it again. You play every day don't you [Adam], you play a lot on the road…"

Adam Zidani: "Well, I try not to play in the house. I didn't start playing until I was 16 and the reason I started playing was a mate of mine, who was the coolest kid in school, he had a Hondo Les Paul and a Gorilla amp. He was cool as fuck, all the birds liked him. And I wasn't. So I picked it up.”

Where did your guitar playing story go from there, Adam?

Adam: "I became absolutely fascinated with it. I would play all day. I used to work in a warehouse and I'd take my guitar to work. The guy who owned it was a lovely guy and I had a Charvel because I wanted to be Eddie Van Halen. He let me take it in at dinner time and I'd be on a forklift truck and I'd be playing it trying to stack these pallets. He'd look at me going, 'What's the matter with this fucking idiot here?!' But it worked, I liked it. It's exactly what Kel said, it's your friend isn't it.”

Kelly: "Especially when you come from a very small town. I come from a working class area and all my mates in school never had a way to express themselves really. And as life gets tougher, work goes away and all that, it is something you depend on. It's a way of getting something out. It's a good little tool isn't it."