When you purchase through links on our site, we may earn an affiliate commission. Here’s how it works.

A minute’s all it takes to find out what makes a great guitarist tick. Before he jumped into his limo, for the airport we grabbed a quick chat with blues-rock phenomenon and top guitar buff, Joe Bonamassa.

Do you have a type of pick that you can’t live without?

“Dunlop Herco Gold Jazz 3. I’d rather not play than carry on without them. I’m not joking.”

If you had to give up all your effects pedals but three, what would they be?

“Haaa! You ask the most hated man in Pedalandia that? What rock have you been living under? I use just three: Cry Baby wah, Way Huge Overrated Special and Blue Hippo.”

Do you play another musical instrument well enough to do so in a band scenarion? And if so have you ever done it?

“I can fool you for 45 seconds into thinking I am a world class mandolin player. Then the facade crumbles and you figure out I am shit at all things other than guitar.”

“Yes... I can read the phone number of the person to call who can read it for me.”

“Yes, to a certain point. I absolutely love Klotz cables. The most transparent, reliable cable for the money bar none. However, I do not subscribe to the electronic momentum specificity that certain cable companies have figured out how to charge people £1,000 per meter for.”

Is there anyone’s playing (either past or present) of which you’re slightly jealous?

“Eric Johnson, Eric Clapton and most recently Daniel Donato from Nashville Tn. That guy can flat pick better than I have heard in 20 years on a Fender Telecaster. Staggering timing and phrasing.”

Your house or studio is burning down: which guitar do you do an emergency dash for?

“I have a drill that I practise. And I’m not joking. I can haul eight guitars outta Nerdville on my own in a hurry. The list is: The Black Burst, the two 1958 Flying Vs, Principal Skinner and The Howard Reed Strat. The three that fall out of my hands I will go back for. Why? Cause they are seriously worth risking my life for. Duh!”

What’s your favourite amp and how do you set it?

The first and the best

“My dad... Then he introduced me to the music of Eric Clapton. The rest is history.”

What was the first guitar you ever really lusted after?

“The early 50s Fender Esquire at the House Of Guitars in Rochester New York, circa 1983. I recently bought the guitar after 35 years of tyre kicking. Thanks Bruce!”

What do you think was the best gig you ever did?

And what would you describe as your worst playing nightmare?

“People leaving my show before it’s over.”

“Yes, but I’m encouraged and discouraged by the internet era of stunt guitar playing. On one hand I see these people playing amazing guitar on Instagram and the Internet and I think, ‘I can not, nor should even try any more, it’s so good and technically amazing.’

“On the other hand, I never see that kind of playing pulled off in anger with a band on stage. So it’s discouraging that there aren’t places to play any more that provide a ‘farm’ system to nurture young acts.”

Do you have a nightly pre-gig warm-up routine?

“If I’m not distracted by stuff I need to play about 10 minutes to warm up. If distracted I can do it in five but it won’t be musical.”

If you could put together a fantasy band with you in it, who would the other players be (either dead or alive)?

“I play every night with the best musicians in the world. I am blessed in that department for sure.”

“That really is a bullshit question. There isn’t a best ever. Never will be. There are too many styles and variations of technique to crown a champion.”

“No, but there many songs I wished I wrote.”

What’s the solo or song of your own of which you’re most proud?

“On a studio record solo, No Good Place For The Lonely; live show song, Self-Inflicted Wounds.”

“Figuring out how to make an average guitarist with a big chin and questionable singing voice from Utica, New York a big enough deal to be interviewed in your magazine.”

And what are you up to at the moment (tours, albums, etc)?

“At the time of asking, I’m in France playing a private gig with Beth Hart. And there’s my Keeping The Blues Alive At Sea, Mediterranean Blues Cruise, featuring Peter Frampton and many more. It departs Barcelona on 16 August 16 and runs until 21 August.” 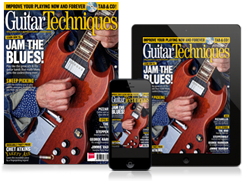 The worlds best high-quality guitar tuition from the UKs foremost teachers and players
Subscribe and save today!
More Info