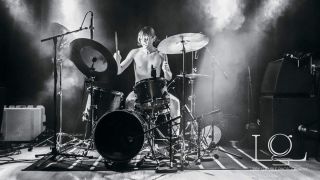 Brooklyn jazz trio Moon Hooch started out as buskers in New York City, where they were responsible for a mass breakout of dancing that got them banned from the subway station where they were playing.

Since then they’ve released four albums and gained something of a cult following for their party jazz. Schooled at the prestigious New School for Jazz and Contemporary Music in NYC, drummer James Muschler actually started out banging on a cardboard box drumset to Rage Against The Machine records.

Whether you’d more accurately describe Moon Hooch’s music as ‘dance jazz’, ‘techno-jazz’ or ‘acoustic techno’, James and co are certainly pushing the envelope of what can be created with a two-sax-and-drums trio.

Check out their most recent record, The Joshua Tree EP, and you can catch them live at the Love Supreme festival at the Roundhouse in London on 5 May.

“I guess you could say it started when I was an infant ’cos my mum would be making food in the kitchen, and I would be with her banging on pots and pans. I don’t remember that - that’s just what she has told me. Then I was studying piano when I was really young, like aged 5-10, and at the time I was really unfocused and didn’t have the patience to read music.

"When I was 12 I got really passionate about the drums for some reason, I kept asking my parents for a drumset and they kept saying no, they were like, ‘I don’t know if you’ll have the discipline for it.’ But they have always been super-supportive.”

When did you start playing in bands?

“I was playing percussion in the school orchestra, and then I formed a ska-punk band with my friends, guitar, bass and drums. I was 14, and we were called the Skatastrophies!”

“I would say my teachers first of all - Jamey Haddad, Dan Weiss and Samir Chatterjee, and then drummers that I really got inspired by were Elvin Jones, Tony Williams, Philly Joe Jones and Papa Jo Jones.”

Which Moon Hooch song perfectly captures your sound and style?

“Our most recent record - just because it is most recent - it’s got kind of a more live raw energy, it’s called The Joshua Tree EP and I guess if I have any style it’s kind of improvisatory...that’s where my heart is, in spur-of-the-moment type music.”

I hear that you had something happen with the NYPD when you guys were busking on the subway...

“Me and Mike [Wilbur saxophone] and Wenzl [McGowen, saxophone] were living off of the L train in Brooklyn and we were taking the drumset and the saxophones down into the subway pretty much every day. And going to the Union Square stop.

"First we were going to the Bedford Avenue stop in Williamsburg, and there were giant dance parties especially at the weekend late at night.

"When we would play down there people would flood the station and miss their train, people were dancing right next to the platforms so the police were like, you can’t do this anymore, so they took down our names and we weren’t allowed back there.

"So we moved to a different subway stop [laughs]!”

“Samir Chatterjee taught me a lot about exercising restraint; Dan Weiss’s approach to drumming is really methodical, and he got me thinking about reflection in the moment, without getting too analytical. Having a reason for making a decision in music.

"Jamie Hadad really got me into just thinking about the groove, and never sacrificing the groove for anything, all my teachers have taught me a lot of different things which have influenced me a lot.”

What advice would you give to someone who is just starting out on drums?

“I think people have a tendency to play really fast and loud, and to want to do that. I think it’s good practice to explore the whole dynamic range of the drumset, see how quiet and slow you can play, and how quiet and fast you can play and how slow and loud you can play - experiment with different dynamics and different speeds.

"Thinking about the drumset that way opens up a whole new world of possibilities, I think if you’re working on that just when you’re starting out it will help you develop a much better technique and sense of musicality. “

What kit are you playing at the moment?

“The new Gretsch Brooklyn bop kit, 18" bass drum. I love Gretsch drums, the cymbals are Zildjian, two Crashes of Doom, and one of them is broken and I have a Sabian Jack Dejohnette 22" ride on top of that, and that’s kind of like the white noise stack. And then I have the Crash of Doom on the right of that. But I’ll probably switch to something else soon, as they are a little bit too bright for Moon Hooch.”