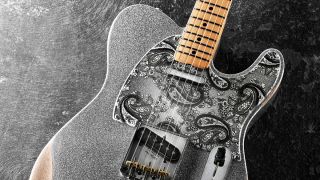 In March 1989, US magazine Guitar Player ran a cover feature with the headline ‘Unknown Greats! Amazing Players You've Never Heard Of’. The issue's cover star, face half obscured in a Phantom Of The Opera mask, was a Washington DC-born guitarist called Danny Gatton.

Quiffed, middle-aged and a bit portly, Gatton was an unlikely magazine cover star - or ’80s guitar hero. This, you may recall, was still the era of stick-thin shredders with pointy guitars and armadillos down their trousers. Danny Gatton was a ’50s throwback. A walkin' pickin' tribute to pioneers like Jimmy Bryant, Cliff Gallup and Chet Atkins, Gatton played his own mix of classic American guitar styles (country, rockabilly, blues) - a style he described as ‘redneck jazz’.

During his lifetime, Danny Gatton was known as The Humbler and The World's Greatest Unknown Guitarist. Crucially, the man was also nicknamed the Telemaster. You see, throughout his feature in Guitar Player, he was pictured with his 1953 Fender Telecaster.

He might as well have been pictured in a Model T Ford. At a time when having as much rack-mounted gear between you and your amp as possible had become the norm, Gatton's old-school approach gave many guitarists the wake-up call they needed.

Gatton's exposure to his biggest audience did much to reignite interest in American roots music. The tragic death of fellow Telecaster icon Roy Buchanan a few months earlier in August 1988 had started that ball rolling.

All of a sudden, people were talking about tone stuff like swamp ash bodies and fat necks, not too mention those high-output early Fender Broadcaster pickups. There was renewed interest in then-forgotten country pioneers like Jimmy Bryant. Country players themselves turned their backs on the processed studio sounds of ’80s Nashville and looked back to the future to rediscover a more organic approach.

"A toilet seat with strings"

By 1950, Leo and his team in Fullerton, California had perfected and produced a single-pickup guitar called the Esquire. It was a work of genius, the perfect working musician's tool, lightweight and tough, powerful yet resistant to feedback. As history proved, however, if Leo assumed his guitar would be an overnight success, he was dreaming...

When Leo Fender dispatched his employees Don Randall and Charles Hayes to launch the Esquire at a trade fair in Chicago in 1950, it was quickly dismissed as a gimmick. As one visitor to the Fender stand famously described it, the Esquire looked like "a toilet seat with strings..."

Looking back, it's easy to understand why the Esquire was poorly received. The prevailing fashion for guitars at that time was the big-ass jazz thing. For pop, jazz and Western Swing musicians, there was no way this tiny Fender concoction, with its thin pine body and fat neck held in place by four big screws, was ever going to part them from their Gibson, Epiphone and D'Angelico jazz boxes.

What Fender needed was a champion. Legend has it that one evening in 1950, Leo, and his engineering consultant George Fullerton, dropped in to the Riverside Rancho, a Western music venue in Glendale, California. Their mission was to get their new guitar, a two-pickup version of the Esquire called the Broadcaster, into the hands of country jazz genius Jimmy Bryant.

The Fender contingent knew that if a player of the calibre of Jimmy Bryant took their guitar seriously, others would line up to give it a chance. As a crowd gathered round to watch him play, Bryant gave the guitar his seal of approval. Word soon got out...

In 1951, Fender had to drop the Broadcaster name after Gretsch complained that it was too similar to that of its Broadkaster drum set. For much of that year, the guitar simply had ‘Fender’ on its headstock. Never one to waste stock, Leo had his employees snip the ‘Broadcaster’ bit off his headstock decals, leaving only the ‘Fender’ portion.

The guitars that carried these decals, now highly prized, are described by collectors as Nocasters. The following year, the guitar was rebooted as the Telecaster in honour of the emerging phenomenon of television, and it's been in production ever since.

These days, the Telecaster is the undoubted King of Nashville, and country music in general. It didn't get there overnight. It is true that the first musicians to take the Esquire/Nocaster/Telecaster on were country guys, more specifically Western Swing artists, but there's a good explanation for that.

For one, Western Swing was the hot ticket in those pre-rock 'n' roll days. What's more, these guys were already Fender customers, drawn to his amplifiers and lap steels. Outfitting them with guitars was like shooting fish in a barrel. Besides, if you break it down, the Telecaster was basically a lap steel you played like a regular Spanish guitar. Its bright punchy sound was perfect for Western Swing.

The Telecaster - and Esquire - saw quite a few changes through the ’50s. The first models had no truss rods. Leo liked having a solid maple neck, but customers complained that they would warp. Fender eventually relented and installed adjustable rods in all subsequent examples. The original pine body wood was ditched in favour of ash, which looked great sprayed in translucent finishes. Alder would also eventually become available on painted models.

The neck profile changed, too, from a baseball bat-fat "U" shape for the Broadcaster and early Teles to a ‘V’ style in the mid-50s. By the end of the decade, a rosewood fingerboard was added to the spec list and the Esquire got a toploader bridge.

The campaign towards real country dominance for the Telecaster was marked by some significant victories. Most influential was a series of 45s cut at Sun Studio in Memphis by a failed door-to-door household appliance salesman.

Aside from Johnny's deep voice and insistent acoustic rhythm guitar, what made these 45s iconic was Luther Perkins' skeletal bottom-string Telecaster picking. Luther was not a gifted musician in the traditional sense, but he's arguably the most recognisable guitarist in recording history. As Johnny's 1959 single testified, "Luther played the boogie in the strangest kind of way..."

Despite his limitations - actually, you could make that because of - Luther's pioneering use of Telecasters and his distinctive bottom-string riffing were an influence on every country guitarist that followed in his wake. He passed away in 1968, but not before performing on Cash's iconic At Folsom Prison released that same year.

The 1960s brought turbulent times for Fender when Leo sold his companies to the Columbia Broadcasting System [aka CBS] for $13 million in '65. The new owners would oversee the development of some great new Teles - the Thinline, the Custom, the Paisley model, etc - but ultimately, by the ’70s, quality would be sacrificed for cost-cutting with stuff like thick polyester finishes replacing nitrocellulose and ill-fitting necks screwed to overly heavy bodies.

In the ’60s, the Telecaster saw iconic action with Ricky Nelson and Elvis sideman James Burton. Only a kid when he began performing, he was a pioneer of Tele string bending. He used thin banjo strings to make bends easier and the idea influenced manufacturer Ernie Ball to begin offering light gauge sets.

What really put the Telecaster on top in country music however was its importance in ‘The Bakersfield Sound’ in the 1960s, and the emerging Outlaw scene of the following decade. Nicknamed ‘Nashville West’, Bakersfield, a small town in California, played host to a new tougher strain of country music.

At its heart was two groups: Buck Owens & His Buckaroos and Merle Haggard & The Strangers. By the early ’60s, the Nashville Sound was the order of the day. Partly engineered by guitarist/producer Chet Atkins, this new country/pop crossover was designed to attract adult audiences alienated by rock 'n' roll.

Out went the banjos, mandolins and hootin' and a hollerin' of traditional country to be replaced by pianos and orchestral string arrangements typified by the smooth recordings of Patsy Cline and Gentleman Jim Reeves.

In direct contrast, ‘The Bakersfield Sound’ put the guitars, both six-string and pedal steel, to the forefront. It was tough music for tough people.

The Telecaster was the perfect fit and Buck Owens, his right-hand man Don Rich, plus Merle Haggard and his partner Roy Nichols, exploited the bright sound of its single coils. Buck sang about love and loss; Merle, a onetime convict, told tales of life on the run.

‘The Bakersfield Sound’ made the Telecaster cool. It cemented its role as a working class, blue-collar tool, a Dodge pickup truck to the Stratocaster's pretty Ford Thunderbird. It looked as good beat to hell as it did in silver sparkle paint - like Buck and Don's iconic Teles.

The Bakersfield Sound reaction against the smooth sound of Nashville pop country would eventually lead to the Outlaw movement in the mid-’70s.

Taking their lead from the tough-sounding records of Merle Haggard, artists like Willie Nelson and Waylon Jennings ignored clean-cut country convention by growing long hair and beards and dressing down in biker threads and cowboy gear.

More importantly they challenged record execs, in particular Chet Atkins, taking control of their own recording sessions. Jennings was a Tele guy. His guitars featured hand-tooled leather covers engraved and dyed with white floral design. While he favoured the bright punchy tone that was more Bakersfield than Nashville, Waylon softened it with a wash of phaser.

All hail the king

The ’80s brought some good news for the Telecaster when Fender Electric Instrument Manufacturing Company employees, led by William Schultz, bought the company from CBS and renamed it Fender Musical Instruments Corporation [FMIC]. The move ultimately led to better quality guitars, the establishment of the Fender Custom Shop, and accurate reissues of the original ’50s models.

The 1980s was not a great decade for mainstream country music, although guys like the Bakersfield influenced Dwight Yoakam, and Outlaw Steve Earle were putting out great work.

The following decade was much healthier with a resurgence of great country players influenced by the likes of James Burton, Brit icon Albert Lee, Hellecaster Jerry Donahue and of course Danny Gatton and Roy Buchanan.

Danny Gatton's legacy in the wake of his death in 1994 is not only as a player. His love of tweaking his Teles with the likes of Joe Barden pickups and customised bridges has influenced a generation of guitarists to build their own 'ultimate' Telecasters.

68 years after Leo first tried to get people to take his new solidbody guitar seriously, the Telecaster is considered the ultimate tone machine by Brad Paisley, Keith Urban and the best two-man Tele team since Buck and Don, Marty Stuart and Cousin Kenny Vaughan of His Fabulous Superlatives.

The Telecaster has been used to play blues, R&B, soul, jazz, power-pop, punk, ska, pub-rock... you name it. Yet, it will always be best known as the king of country music.

Walk into any bar on Nashville's historic Broadway and you'll see a killer guitarist picking the hell out of a Telecaster. It's still the ultimate live tool, a tough customer that delivers great tone from an indestructible package. It's exactly what Leo Fender intended when he began designing the Telecaster, almost 70 years ago.