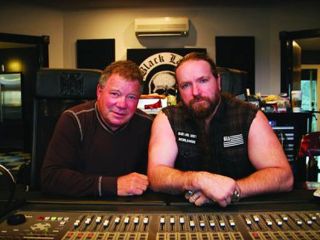 The Captain and the Kid? Something like that. (Image credit: Eric Hendrikx)

Nothing says "Beam me up, Scotty" quite like working with Captain Kirk. That's what guitar god Zakk Wylde discovered when he teamed up with the one and only William Shatner to record a version of the Black Sabbath classic Iron Man for a concept album to be called Searching For Major Tom.

The 80-year-old Shatner is no stranger to putting his own spin on contemporary music. During the '60s, he recorded exaggerated recitations of Mr Tambourine Man and Lucy In The Sky With Diamonds, and in 1978 he performed Elton John's Rocket Man during the Science Fiction Film Awards.

But with Searching For Major Tom, Shatner is clearly trying to outdo fellow hipsters Pat Boone and Paul Anka, who released albums such as In A Metal Mood and Rock Swings, respectively.

Searching For Major Tom, comprised of 19 'interpretations' of classic intergalactic-themed rock anthems, will be released later this year by Cleopatra Records. In addition to Wylde, it sees the Captain getting cosmic with Ritchie Blackmore (on a version of David Bowie's Space Oddity), Peter Frampton (they tackle Norman Greenbaum's Spirit In The Sky) and Michael Schenker (the Tea Party's Empty Glass), among others.

Whether or not the album is a classic or falls into the realm of classic irony is anybody's guess, but we just love the above video, during which Shatner gives direction to Wylde, offering his thoughts on the Iron Man character. That the former Ozzy Osbourne and current Black Label Society guitarist has played this song live something like, oh, a billion times seems to have eluded the Captain. Give it up for the Zakkster, though, who listens attentively and cranks it up appropriately.