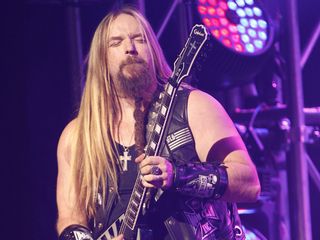 Zakk Wylde admits he's tired, but he says he's got little time for sleep. "Black Label Society is all fired up, bro. We're doing Ozzfest and then we've got our own tour. I'll tell you, my to-do list could make you cry. I'm booked 25 hours a day, eight days a week, 366 days a year. Going on tour is the only vacation I can get."

Even so, the 43-year-old guitar superstar sounds happy and full of vigor. And with good reason: the new album by his band Black Label Society, Order Of The Black, is one of their strongest efforts in years. Full of blistering rock (Parade Of The Dead, Crazy Horse) and heartfelt ballads (Time Waits For No One, January), it's Wylde's first release under a new deal with E1 Music, an arrangement that also includes his own label, Panworkz.

For Wylde, 2010 is already a far cry from the tumult of 2009, which saw him dismissed from Ozzy Osbourne's band after a 22-year-association (he was replaced by Firewind guitarist Gus G). Then there was a potentially life-threatening bout with blood clots, which started in his legs and quickly spread to his lungs. After a stint in the hospital, the brew-loving Wylde was put on blood thinning medication and given the ultimatum by his doctors: stop drinking, or else. "It was a hairy time," the guitarist admits. "But hey, who doesn't have hairy times? I'm just like any other poor sucker out there. We're all in the same boat."

Except most poor suckers don't have a burgeoning music career, their own line of Gibson signature guitars and a recently finished home studio called, appropriately enough, The Black Label Bunker.

In the following, no-hards-barred interview (is there any other kind with Wylde?), the multi-talented musician holds forth on a varety of topics: his health, life post-Ozzy, his new album and...Justin Bieber? (Believe it!)

So first things first: How are you feeling? Things back to normal for you health-wise?

"I feeling great, man. Back to drinking - I'm getting' wasted all the time, brother."

No way! Are you joking?

OK, now I know you're pulling my leg.

[laughs] "Of course I am, bro! I haven't had a drop of alcohol in a year. It's all good. I don't see what the big deal is. I've gone a year without drinking, I may as well keep going, you know? I'm not even on the blood clot medicine anymore; I just have to take shots when I take long flights and stuff.

"It's so funny when people ask me, 'So how'd you stop drinking?' I just tell 'em, 'I stopped. What's the big deal? Unlike you weak-willed motherfuckers who have to spend $40,000 for some douche bag to get you to stop, I stopped on my own.' It's all a matter of willpower, man."

Ozzy and Zakk on stage at the Greek Theatre in Los Angeles, 2007. © Mario Anzuoni/Reuters/Corbis

Willpower and doctors telling you that if you kept drinking, you'd be dead by the time you were 50. I would think that's a pretty good wake-up call.

"Oh yeah. And then the doctors told me, 'Zakk, if you start hittin' the sauce while you're taking this medication, forget it, you're gone, dude. You'll literally start bleeding from every fucking hole in your body. Your mouth, your eyes, your ears, your ass, your dick...'"

"Not a pretty picture. [laughs] So that was all I needed to hear. After a month of not drinking, I felt fine. You don't need to go to rehab or any of that shit. If you want to stop drinking, stop drinking - it's that simple."

Well, God bless you, man. Before we talk about your new album, what are your thoughts on Ozzy's record? I assume you've heard it.

"Yeah, I've heard it. Oz is singing great, and Gus is playing great, man. I've seen 'em on the George Lopez Show and The Tonight Show - they sound fuckin' cool, man. They're terrific."

That's mighty magnanimous of you. Last year Ozzy made the comment that he thought his records were starting to sound like Black Label Society, which I took to mean as not sounding 'heavy metal' enough. I know you like southern rock, but in no way does Order Of The Black sound like Lynyrd Skynyrd.

"My relationship with Oz is just the same as it's ever been. Just the other night, me and Barb went out to dinner with Ozzy and Sharon. We went out to a steakhouse and laughed our asses off, you know? Everything's cool with us. It's like with your parents: nothing's changed, except you don't live at home anymore.

"People think that this is some nasty thing or had to be like some sort of Slash and Axl situation. It's not. I remember Ozzy saying years ago, 'Zakk, I don't want to be the lead singer in Black Label.' I have to respect the way he feels and how he hears things.

"And listen, without Oz, I wouldn't be doing any of the things I'm doing. I've got my own label, Panworkz; I'm going to be coming out with Black Label beef jerky, coffee, beer; I'm working on opening up Black Label pubs - you know, like sports bars with live entertainment; I'm working on a movie script and a coffee table book. I'm booked solid, man, and none of it would be happening without Oz. So God bless him, you know what I mean? He's the best."

I hear you. So let's talk about your new record, which is the first album you've recorded since you stopped drinking -

"Yeah, but it's not like I recorded those Ozzy records wasted or anything. I was just drinking beers through the day, nursing 'em, you know? It's like having a nice little glow going on. I still had to sing in key and play in pitch. I was never hammered."

OK. However, I do think your singing on this album is particularly strong. Do you hear a difference?

"Not really. I mean, I'm glad you think so, but I think…I think it's a good record, you know? [laughs] Maybe I was pushing more. I mean, I'm not going to say the other records aren't good, but I might have been giving something extra on this one. Who knows?"

How long did it take you to put the album together?

"Written and recorded in 94 days."

That's pretty fast. I assume having your own studio helped.

"I don't know. It's just the way I roll, you know? I mean, Axl Rose took 15 year or whatever to make that record of his, and he could do whatever he wanted. At the end of the day, it's all about getting in, laying it down and getting out. That's all you've gotta do. Anybody can spend an eternity in the studio if they want to."

Still, it must be a bit easier to work with a studio in your house - you can wake up and start making music in your slippers.

"It's a little easier. But to be honest, I don't know how to work half of the equipment, so I still have to call Adam [Klumpp], my engineer, and get him over. I can wake up with an idea, but I can't get rolling till he comes by."

You have an ever-growing line of Gibson and Epiphone Zakk Wylde models. Do you ever pick up any other brands when you're in the studio?

"Not really. Between all the Gibson and Epiphone models, I get everything I need. I've got my Grail [a 1981 Les Paul Custom] - can't do anything without the Grail. Then I have the Rebel [a Les Paul Custom adorned with beer bottle caps], my ZV [a combination SG-Flying V], the Graveyard Disciple, and for acoustic stuff I use Epiphone Masterbuilt steel-string and nylon-string models.

You've had a few changes to the band since the last album.

"Yeah, I've got Will Hunt on drums. Will played with Evanescence and Static-X, and he's awesome. Our last drummer, Craig [Nunenmacher], told me, 'Zakk, we're not touring year-round, so I've gotta do something else. I might go into the medical field or be a personal trainer.' And I said, 'Hey, you gotta do what you gotta do, buddy. The door's always open.' That's the thing about Black Label: nobody ever gets fired. If you can make more money playing with Celine Dion, God bless ya, go right ahead."

And you've got JD, John DeServio, back on bass. He left for a while but he's a member again.

"We've got JD and the evil twin, Nick Cantese, on rhythm guitar. We're rollin'. Black Label's like a club. We love hanging out, we love playing together. Basically, if you can play your ass off and you're not a douche bag, you're cool."

You do some amazing guitar shredding on the album, but I'm really knocked out by the flamenco work you do on the song Chupacatra. Where did that come from?

"Oh, thanks, brother. That's my ode to Paco de Lucia, John McLaughlin and Al Di Meola. Plus, there's a little Eddie Van Halen Spanish Fly vibe in there, too. I'll go buy all of these records by flamenco and classical guitarists, and they're just slammin'. The chops on these guys are unbelievable. So I wrote the piece out and there you go. It's my own little Spanish Fly - a cool break and then you're flying into the next song."

Here's a weird segue. I understand that Justin Bieber's guitarist has been playing one of your Gibson Zakk Wylde Bullseye models on stage.

"Oh yeah, Dan Kanter! It's awesome. The only problem is, Bieber is so huge that all these kids are going to see Dan playing the Bullseye, then they might see me and they'll go, 'Oh, look at that scary guy with the beard. He's playing a Dan Kanter guitar!' [laughs] I love it. The kids in the world don't know it, but with their Justin Bieber they're getting a little Zakk Wylde. It's all good, bro."