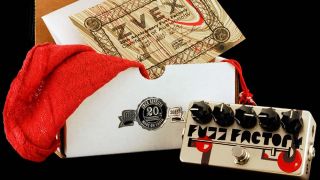 It's hard to believe we've been experiencing the radical shrieks and squeals of Z.Vex's Fuzz Factory for 20 years, but to celebrate the milestone, Zachary Vex has unveiled a luxurious limited-edition 20th Anniversary Fuzz Factory.

Each pedal features a Bauhaus-inspired design hand-painted by longtime Z.Vex artist Lisa McGrath, as well as a plate commemorating the Fuzz Factory's 20th Anniversary and a certificate of authenticity, signed by Vex and McGrath.

Only 25 of these pedals will be made - and according to Z.Vex, will never be made again - so if you want one, you'd better act fast.

The Z.Vex 20th Anniversary Fuzz Factory is available now from Z.Vex for $499.