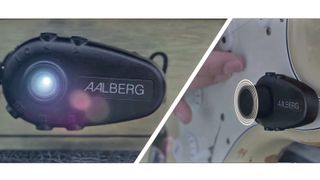 Norwegian effects mogul Aalberg Audio is no stranger to wireless guitar tech, and its newly launched-on-Kickstarter MOON Switcher further expands the concept by offering wireless control of all your gear.

Via wireless integration with AA's guitar-mountable AERO controller, the MOON can switch amp channels using a footswitch jack; operate as an ABY switcher or FX loop for pedals; or control MIDI devices by assigning MIDI messages to the AERO buttons.

The AERO controller also connects to the company's REMOTE app, which allows you to set and store switching presets - guitarists can change up to eight units at the press of a button.

A standard 9V power supply will provide enough juice for the MOON, while the AERO is rechargeable, with up to 30 hours battery life.

As we've come to expect from Aalberg Audio, it's smart stuff. MOON is currently available in three configurations from Kickstarter, at $119 (amp), $129 (MIDI) and $139 (ABY/FX-looper).