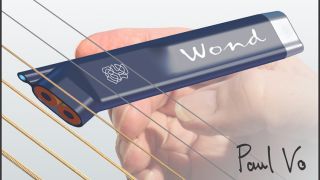 If Harry Potter played the guitar, he'd have one of these. Probably.

Billed as a "magnetic plectrum", Paul Vo's Wond is a handheld string exciter, sustainer and controller for players of the guitar and other stringed instruments.

Based on technology that was previously seen in the Moog Guitar and Vo-96 acoustic synthesizer, the Wond promises infinite sustain (if that's what you want) and the option to pinch your finger and thumb for control over amplitude and harmonics. You can also use the device as a slide.

Comparisons will inevitably be made to the E-Bow, but Vo claims that the Wond is based on different technology and uses a "patented collocated vibration control system".

Head to Paul Vo's Wond Kickstarter page to find out more. A pledge of $179 should get you a Wond in September 2015.