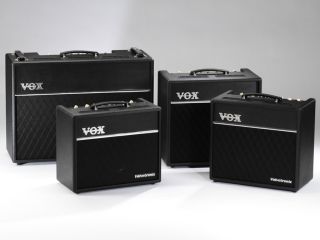 - Accurate amp models encompass the entire Vox lineage from the traditional AC30 to the modern Night Train, plus an impressive list of other hard-to-come-by classics and rare hi-gain boutique models

- Use the optional Vox VFS5 footswitch to change programs to turn effects on and off, or to set the Tap Tempo function

Of the broad lineup of Vox amps - from large all-tube amps to mini transistor amps - the Valvetronix Series is acclaimed by the broadest range of musicians and is being used in the widest variety of musical scenarios today.

Delivering the perfect fusion of great tube amp sound and cutting-edge modeling technology, the original Vox Valve Reactor circuitry made its sensational debut in 2001 as the guitar amp for the new century. Since then, it has undergone continual renewal in response to the latest developments in amps, and in order to flexibly meet today's needs.

Now in 2010, the Valvetronix series is once again powerfully and dynamically reborn, offering a larger number of highly evolved amp models than ever before. From the convenient and portable VT20+ to the dual-speaker VT120+, the new Valvetronix+ Series delivers the guitar sounds sought after by discerning guitarists of every style.

After painstaking analysis of guitarists' tastes and preferences, Vox has focused on the importance of the power amp circuit in creating the sonic characteristics long sought from tube amps. The Vox Valve Reactor was developed out of this power amp philosophy. Based on a 12AX7 vacuum tube, the Valve Reactor circuit at the heart of every Valvetronix+ Series amp perfectly reproduces the operation, subtle nuances, and tonal character of a real tube-powered amp.

More amp models than ever before

The new Valvetronix+ Series boasts an amazing collection of 33 distinct amp models - a new milestone for Valvetronix amplifiers. In addition, the Valvetronix+ represents a giant leap in quality.

The preamp EQ features Bass, Middle and Treble controls for precise tone-shaping. Beginning with classic Vox amps such as the AC30, the diverse amp model selection continues to encompass coveted amps from the pages of history, as well as the latest high-gain amps, providing a sound selection that spans the ages.

Call up the sound of an old favourite, or experiment with amps you may never have tried - sought-after amps played by your guitar heroes, rare boutique amps, and vintage amps - and pursue unexplored sonic paths.

One of the best features of Vox modeling amps is the ability to combine the built-in effects with the onboard amp models to create a complete and powerful sound.

Just as with the effects, the Valvetronix+ Series makes no compromise when it comes to effects, boasting a level of quality that rivals top standalone units. The broad array of effects is divided into two sections: Pedal effects such as distortion, wah, and compressor; and Modulation/Delay effects such as chorus, flanger, and tape echo.

In each section, there are 11 effects to choose from. Featuring easy-to-use settings, you can simultaneously select the effect type and adjust its parameters. In addition, there are three types of Reverb (Room, Spring, and Hall). With the addition of Noise Reduction, up to four different effects can be used at the same time.

The musicians at Vox have put together 99 preset programs, expertly voiced and ready for immediate use. Each of the 33 amp models provides three presets: Basic, Effected, and Song. An Effected preset calls up the correct combination of effect type and setting for a particular style.

Song presets are just like Effected presets; each one is a faithful recreation of the signature sound used by a famous guitarist to perform one of their classic tracks.

Of course you're also free to edit any preset - or start from scratch with the manual setting - and save up to eight of your own custom sounds to the User presets.

One of the greatest advances from previous Valvetronix models is the astounding sense of power generated by the Valvetronix+ Series. The power amp section has the potential to significantly exceed the wattage value indicated by the model name - as indicated by the shaded section of the Power Level knob.

The new Valvetronix+ Series also feature a newly re-voiced Vox original design speaker that is sure to amaze you with a powerful sound that you would not expect from a chassis and speaker of this size. These fine Valvetronix+ amplifiers genuinely deliver sonic power that cannot be expressed by mere numbers.

The sense of drive produced in the tube power stage is what defines the inimitably fat and warm tone that's at the core of a great guitar amp sound. Our tube-driven Valve Reactor circuitry is at the heart of recreating this sound.

Convenient and versatile input and output

The headphone out jack can also be used as a direct line output. This output is equipped with the simulated response and character of a speaker cabinet, so you'll enjoy the natural spatial sense of playing through speakers, even when using headphones or when connected to a mixer or recording system.

Plug your CD or MP3 player into the Aux input jack and enjoy jamming along with your favourite songs. In addition, the tuning function needed by every guitarist is built in, eliminating the need for a separate tuner.

Plug in the optional VFS5 footswitch is connected, and use your feet to switch programs, turn the reverb and other effects on/off, and control their speed, providing additional options for sonic creativity and live performance power.

(Three versions of each amp model are provided: Standard, Special, and Custom).

Gravity, Brown Sugar, Cocaine, Creep, I Feel Fine, Pride, Foxy Lady, Enter Sandman, Song 2, Know Your Enemy, Blue Wind, Message In A Bottle, Under The Bridge, Sultans Of Swings, Rebel Rebel, You Enjoy Myself, Smoke On The Water, Beat It, For the Love of God, Best Of You, Satch Boogie, Smells Like Teen Spirit, Wonderwall, Pride and Joy, Walk This Way, Back In Black, Paranoid, Tie Your Mother Down, Black Dog, Sweet Child O' Mine, Five Minutes Alone, Hot For Teacher, Raining Blood.