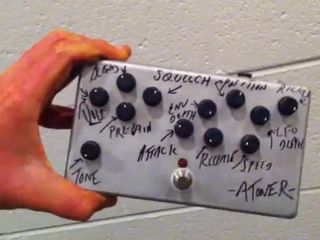 Just what does one do with an 'A Toner' pedal?

The Smashing Pumpkins are deep into recording their 'album-within-an-album' Oceania, due out this fall. While bassist Nicole Fiorentino lays down bass tracks, Billy Corgan knows how to psych himself up for his part of the album-making process - he goes through a shopping cart or two of guitar effects pedals!

As you can see in the above video, it's stompboxes a-poppin' in Pumpkins Land, with Corgan showing off pedals old (wanna know how to get that Siamese Dream lead sound? Here's how!), custom (just what the heck is an 'A Toner,' to say nothing of a 'Bloody Finger'?), and a Vox Phaser still in its case.

Guitar virtuoso that he is, Corgan has never claimed to be a straight-into-the-amp kind of guy, which this video clearly bears out. But from the looks of things, there's probably a few pedals - or maybe a dozen - he's simply not going to have time to use. Hey Billy...if you're ever holding a garage sale, how can we get in on the action?