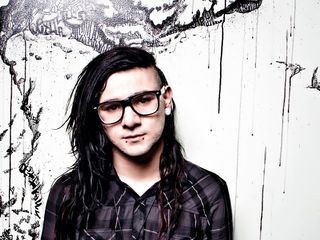 It seems to be somewhat-iffy collaborations day here on MusicRadar.

Earlier we brought you Brian May soloing over former N-Dub Daddy's latest single. Well, now we have wobble-centric pop producer Skrillex working with the surviving members of Californian rockers The Doors.

Check out the video above to hear Breakn' A Sweat, the (vaguely disconcerting) resulting track. Plus, you get to see Skrillex making some faces as he makes music on his laptop in a plush hotel room.

The pairing came about as part of a new documentary called Re:Generation, in which a group of producers including DJ Premier, Mark Ronson and Skrillex 'rework' traditional musical styles. Check out the trailer.