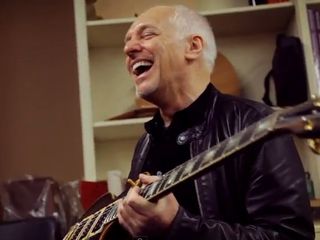 Last month, we reported the news that Peter Frampton had been reunited with his 1954 black Les Paul Custom - the very same instrument he was pictured with on the cover of the mega-selling album, Frampton Comes Alive!

The guitar, which was believed to have been destroyed in a plane crash in Caracas, Venezuela in 1980, was returned to Frampton last year by Ghatim Kabbara, who also works for the Curaçao Tourist Board. Kabbara acquired the guitar from a musician who bought it (somebody grabbed it from the airplane wreckage and sold it) and sent it to the Gibson Custom Shop in Nashville for authentication.

It was at the Custom Shop that the guitar underwent a restoration, documented in the above video. Peter Frampton will play the 'Frampton Comes Alive!' Les Paul for the first time in public this Saturday, 18 February, at New York City's Beacon Theatre.