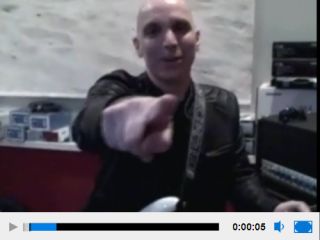 Satriani wants YOU to check out his new amp

MusicRadar caught up with Satch in Sammy Hagar's Marin County warehouse/studio/car hangar. We're here to listen to mixes of the upcoming Chickenfoot album and talk to the band about how they plan to conquer time and space.

That's later in the day. Until then, Satriani is in sonic heaven. The guitarist whacks at his guitar, taking a moment to let each sound erupt and recede. Some refuse to give way - they hang in the air.

Satch smiles, his eyes dancing, and says, "That's what I'm talkin' about." Nearby, a couple of Peavey designers look at one another and nod: "We did it."

Joe Satriani had many ideas for the JSX 50, but only one goal: "To create the most versatile 50-watt amp ever," he says.

"The classic 50-watters gave you power but one sound. Then you got newer amps with incredible tones, but no juice. I see no reason why you have to sacrifice anything - and we've just proved it."

Check out the video below in which Satch - candid and somewhat zany - takes MusicRadar on a guided tour of the JSX 50.