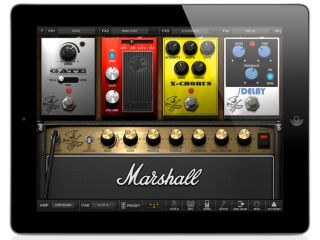 IK Multimedia has announced details of a tie-in with the world's most recognisable guitar hero and all-round legend Slash. AmpliTube Slash brings the former Guns N' Roses star's signature guitar tones to your iPhone, iPad or iPod touch for just £6.99.

You can buy AmpliTube Slash via iTunes now. Check out the accompanying videos to hear Slash demo and discuss the new app, and read on for the official skinny from IK Multimedia:

"AmpliTube Slash is a full-featured mobile guitar effects processor and recording studio app that lets you play, practice and record with Slash's signature gear, anytime and everywhere. Use our iRig or iRig STOMP interfaces to connect your guitar to your iPhone/iPod touch/iPad.

"AmpliTube Slash lets you configure a flexible guitar signal chain complete with three stompbox effects and an amplifier head with cabinet plus a single-track recorder (expandable to four tracks) for capturing your musical ideas quickly and easily.

"AmpliTube Slash features models of all the legendary signature gear used by Slash in the studio and for his live performances. Now you can rock models of the legendary MarshallJCM Slash Edition Silver Jubilee, the Marshall AFD100, Slash's signature guitar pedals, and import/purchase and play along with Slash's extensive discography or any music from your music library. Also included is a collection of 30 Slash guitar tone preset settings, provided as starting points for your own tone tweaking or playing along.

"AmpliTube Slash also features a robust 'song' player section that allows you to play along with songs or backing tracks by importing them directly from your device's iPod library or from your computer. The song section also features links to Slash's music available for purchase on the iTunes store that can be downloaded and added to your library and the app for play-along.

"The Song section also includes our popular SpeedTrainer learning/practice feature which can slow down or speed up the tempo of audio material without affecting pitch. A digital chromatic tuner and metronome are also included.