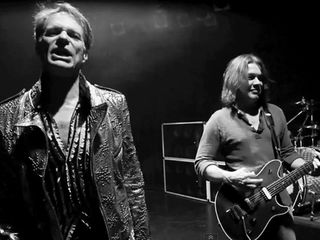 David Lee Roth and Eddie Van Halen, as seen in their recent video trailer, will rock NYC with the rest of Van Halen this week.

Van Halen haven't played a club show since...well, since they were a club band back in the '70s, when they were regulars at Los Angeles venues like Gazzarri's, the Whisky a Go Go and the Starwood. But this Thursday (5 January), the band will play a special set at New York's legendary Cafe Wha? for invited journalists.

The performance at the 250-seat nightspot (once owned and operated by David Lee Roth's uncle Manny Roth) will likely give writers a taste of what to expect on Van Halen's highly anticipated new album, which is rumoured to be released on 7 February.

It is also said that the debut single and video from the upcoming disc (the band's first with Roth since 1983) will be issued next week, 10 January. Tickets for the initial dates of Van Halen's world tour will go on sale that same day - the cities and venues are to be announced later today.

Those attending the Cafe Wha? gig will be seeing a well-prepared group: Van Halen spent the last two months of 2011 working things out at the Roxy Theatre in Hollywood. Roxy employees who witnessed the rehearsals recently posted their enthusiastic comments on the venue's website.