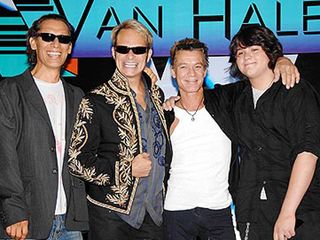 "We had a lot of fun on the tour - Dave was a blast," he says. "And next time we go out, we're going to have some new stuff, too. I'm looking forward to getting on it."

First up on the guitarist's Things To Do list, however, is a June wedding with fiancé (and Van Halen publicist) Janie Liszweski, to be followed by a high school graduation ceremony for his son (and bass player) Wolfgang.

"I hope that after Janie and I get married, and Wolfie graduates, that we sit down and discuss recording new music."

"I've got tons of music written, such a variety of stuff," says Eddie, who is of the belief that some of it may surprise and even shock longtime Van Halen fans.

"The essence of me is obviously there, and those drums, they're always recognizable. But people expect a certain thing from Van Halen, and this isn't exactly bang-your-head-against-the-wall stuff."

He adds, "Actually, next week or the week after, Wolfie, Alex, and I are gonna start jamming. Maybe we'll give Dave a call and see what he's up to."

Hopefully, Dave is resting his pipes and getting set to make a return-to-form Van Halen album, the likes of which we've been waiting for since, oh, 1984.