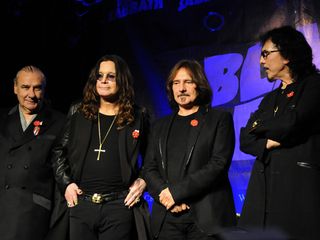 UPDATE: Ozzy Osbourne, Tony Iommi and Geezer Butler have responded to drummer Bill Ward's announcement that he would not participate in a Black Sabbath album and tour unless he received a "signable contract." Our original story is below, with the response from Osbourne, Iommi and Butler directly following.

Another problem has beset the much-anticipated Black Sabbath reunion. Last month, guitarist Tony Iommi revealed that he had been diagnosed with lymphoma, forcing the group to shift their plans for recording a new album from Los Angeles to London, near where Iommi lives. Now Bill says he might sit the album and tour out, and it's not because of health reasons.

Ward has gone public with a statement on his website indicating that he will not participate in the reunion unless he is presented with a "signable contract." Below is the original text of Bill Ward's letter:

At this time, I would love nothing more than to be able to proceed with the Black Sabbath album and tour. However, I am unable to continue unless a 'signable' contract is drawn up; a contract that reflects some dignity and respect toward me as an original member of the band. Last year, I worked diligently in good faith with Tony, Ozzy and Geezer. And on 11/11/11, again in good faith, I participated in the L.A. press conference. Several days ago, after nearly a year of trying to negotiate, another 'unsignable' contract was handed to me.

"Since the news of Tony's illness, and the understanding that the band would move production to the U.K., I've spent everyday getting to or living in a place of readiness to leave. That involves something of a task, and as I've tried to find out what's going on with the U.K. sessions, I've realized that I've been getting 'the cold shoulder' (and, I might add, not for the first time). Feeling somewhat ostracized, my guess is as of today, I will know nothing of what's happening unless I sign 'the unsignable contract.'

"The place I'm in feels lousy and lonely because as much as I want to play and participate, I also have to stand for something and not sign on. If I sign as-is, I stand to lose my rights, dignity and respectability as a rock musician. I believe in freedom and freedom of speech. I grew up in a hard rock/metal band. We stood for something then, and we played from the heart with honesty and sincerity. I am in the spirit of integrity, far from the corporate malady, I am real and honest, fair and compassionate.

"If I'm replaced, I have to face you, the beloved Sabbath fans. I hope you will not hold me responsible for the failure of an original Black Sabbath lineup as promoted. Without fault finding, I want to assure everyone that my loyalty to Sabbath is intact.

"So here I am. I lay my truth down before you. I'm good to go IF I get a 'signable' contract. I don't want to let anyone down, especially Black Sabbath and all the Sabbath fans. You know I love you. It would be a sad day in Rock if this current situation fell to the desires of a few.

"My position is not greed-driven. I'm not holding out for a "big piece" of the action (money) like some kind of blackmail deal. I'd like something that recognizes and is reflective of my contributions to the band, including the reunions that started fourteen years ago. After the last tour I vowed to never again sign on to an unreasonable contract. I want a contract that shows some respect to me and my family, a contract that will honor all that I've brought to Black Sabbath since its beginning.

"That's the story so far. Stay safe and stay strong. I love every single one of you - Bill Ward"

Update - Here is the response from Ozzy Osbourne, Tony Iommi and Geezer Butler:

"We were saddened to hear yesterday via Facebook that Bill declined publicly to participate in our current Black Sabbath plans...we have no choice but to continue recording without him although our door is always open... We are still in the UK with Tony. Writing and recording the new album and on a roll... See you at Download!!! - Tony, Ozzy and Geezer"