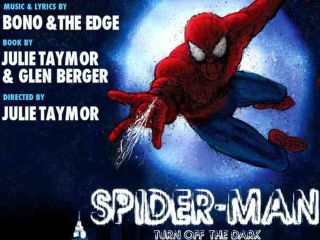 Spider-Man: Turn Off The Dark hasn't even opened yet (and goodness knows when it will), but it's already one of the most famous shows in Broadway history. Since last fall, the $65 million production has endured endless days, months of previews, injuries to several cast members and an opening date that has moved more times than anyone can count.

Earlier this week, following days of speculation, the producers of the show announced that director Julie Taymor would be leaving the trouble-plagued musical, which features songs composed by U2's Bono and The Edge.

As of now, the show's producers say that the production's most recently announced opening night, this Tuesday (15 March), has been pushed back until "early summer." Previews, however, will continue as the creative team reworks the script and staging. (And despite the negative publicity that has surrounded the show, those previews are packing 'em in: last week, Spider-Man: Turn Off The Dark was Broadway's number two money-maker, right behind the musical Wicked.)

In the wake of director Taymor's exit, Bono and The Edge issued a statement, saying, "Julie is a truly gifted and imaginative director. This is an epic ride, and the standing ovations we have seen from the preview audiences have confirmed our absolute faith in the project.

"We are listening and learning and, as a result, we have a couple of new songs we are very very excited about putting into the mix. All of us on the creative team are committed to taking 'Spider-Man' to the next level. We are confident it will reach its full potential and when it does, it will open."