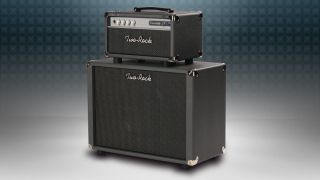 See the name Two-Rock and you're more likely to think American stages, contemporary blues and John Mayer rather than Gavin & Stacey, rugby and Gorky's Zygotic Mynci, but the name of the company's new guitar amp pays tribute to Wales's great capital city.

We're not quite sure whether the 15-watt head's name signifies a particular brand of Welsh tone - Manic Street Preachers, Stereophonics, Funeral For A Friend? - but we do know that the Cardiff pairs British heritage with Two-Rock performance engineering.

Inside, two EL84 power valves have been tweaked to offer less compression, a fuller midrange and tighter bass response than what you'd traditionally expect from this valve line-up.

Controls are kept simple, with bass, treble and volume, plus an active contour control sweep, which maintains preamp tone control settings and allows for quick tonal tweaks to adapt to different guitars and venues - handy if you're playing Clwb Ifor Bach one night, St David's Hall the next. A passive effects loop rounds off the spec.

The Two-Rock Cardiff is out now for $1,595, and a matching 1x12 speaker cabinet is also available. Tidy.