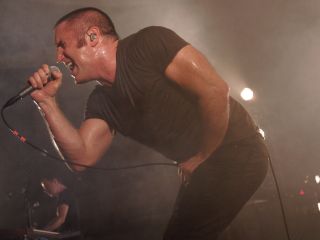 Reznor also apologizes to fans for his online absence of late. "I've been working on not working for a couple of months, which for me is hard work," he writes. "I am in a state of rediscovery and reinvention that feels unfamiliar, unsure and exactly what I need." (Hey, who isn't?)

Somewhat surprisingly, however, Reznor got back to his Tweeting, saying that "Nine Inch Nails fans kick ass."

He also provided a link to a concert video that NIN made with their fans. Another Version Of The Truth: The Gift was filmed by the NIN crew during several Lights In The Sky concerts in with high-quality cameras. The raw footage was then distributed to fans, who edited it into a live document. The concert video - available on DVD, iPod, YouTube and, coming soon, Blu-ray - can be downloaded for free at the This One Is On Us website.