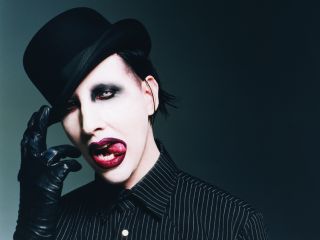 We ask you...is this the face of a clown?

In an interview with Mojo, the Nine Inch Nails man pulled no punches, saying that Manson is "a malicious guy and will step on anybody's face to succeed and cross any line of decency. Seeing him now, drugs and alcohol now rule his life and he's become a dopey clown."

Even so, Reznor does temper his vitriole with some kind words about Manson, saying, "He used to be the smartest guy in the room. And as a fan of his talents, I hope he gets his shit together,"

The Downward Spiral really was just that

The bad blood between Reznor and Manson apparently dates back down to the Nine Inch Nails Downward Spiral tour in '94 and '95.

"During the Spiral tour we propped them up to get our audience turned on to them," says Reznor, "and at that time a lot of the people in my circle were pretty far down the road as alcoholics. Not Manson. His drive for success and self-preservation was so high, he pretended to be fucked up a lot when he wasn't."

But Reznor does Reznor appear to accept some responsibility for the faling out: "Things got shitty between us and I'm not blameless. The majority of it though was coming from a resentment guy who finally got out from under the master's umbrella and was able to stab him in the back."

Others get the Reznor diss

Marilyn Manson is not the only one to suffer Reznor's wrath of late. Earlier this year, he took Chris Cornell to task for his Timbaland collaboration, Scream, stating via Twitter, "You know that feeling you get when somebody embarrasses themselves so badly YOU feel uncomfortable? Heard Chris Cornell's record? Jesus."

Reznor also leveled criticism at Prince and Rivers Cuomo in another interview. "I'm not Prince or Rivers Cuomo, who brags about having hundreds of great songs," Reznor said. "And to that I would say, 'Prince, if you have a hundred great songs or a thousand, how about picking a few and putting them on your record that you've put out, because your last several have sucked.' Same for you, Rivers. I say that constructively, you know."

All of which asks the burning question: Is there anybody Trent Reznor actually likes?