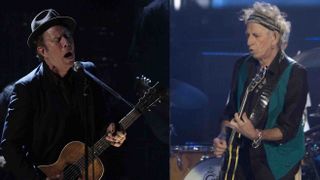 There have been a number of Tom Waits and Keith Richards collaborations over the years - Richards has cropped up on Waits' Rain Dogs and Bad As Me albums - but this is perhaps the most poignant: Waits has penned an original poem about Keef, simply titled 'Keith Richards…'.

The poem appears in Rolling Stone's tribute issue, Keith Richards: The Ultimate Guide to His Music & Legend, and features a number of references to Keef's inimitable guitar style ("His tunings are furiously guarded secrets"), as well as the surprising revelation that "He can run faster than a fax machine."

You can read Waits's full poem below.