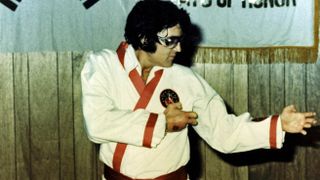 You might think there aren't many similarities between martial arts and making music. After all, one involves deploying delicate skill and refined sensitivity to pour wondrous noise into the earholes of others, and the other involves repeatedly hitting others until they ask you to stop doing that, please, thanks.

And yet, as you are about to find out, the two have much more in common than an affinity for violence exhalations of breath. Read on and be enlightened, grasshopper....

Every martial arts movie has the moment when the reluctant hero is forced to fight. The aspiring ass-kicker is clumsy and untutored, but dammit if they don't get back up every time their booted to the ground.

The path is clear: they must learn the secret ways and become a martial arts master if they are ever to defeat injustice. It is noble, and it is awesome. It is also analogous to something that happens to every guitarist.

We all remember the moment. Some of us stumbled over a dusty guitar in an attic or joined an after-school club out of pure curiosity when we were still in short trousers. Many of us had our brains altered by specific records, songs, solos even. Some were simply born to rock.

Whenever it happened, you never forget the call. It put you on the path to righteous rockery, and your life will never be the same...

Mr Miyagi. Mickey from Rocky. Yoda.* Your classic martial arts mentor is part-teacher, part-life coach, part-keeper of the sacred flame. With their help, you'll be knocking out bullies and raising X-Wings from swamps quicker than you can say 'training montage'. But musicians needs mentors, too.

Sometimes they're the tutor that put you on the road to success by helping you strum your first wobbly chords, but it's not always as straightforward as that. The guy in the guitar shop that showed you how harmonics work, the older cousin that introduced you to Sabbath, the next-door neighbour with the Les Paul/Marshall half-stack that he let you awkwardly paw at - mentors, each and every one.

Listen to their wisdom, learn their ways, and one day you will be the mentor.

*For the purposes of this list, becoming a Jedi very much counts as learning a martial art.

Martial artists wouldn't get far without knowing how to properly punch, kick and flip every motherflipper in the room. But all that kick-assery is only possible through the application of the basics. Throw a punch incorrectly and you'll hurt yourself more than you'll hurt the Triad/mugger/henchman you were trying to hero all over.

Technique, in martial arts, in music, in life, is everything. Fumbling at a fretboard looks bad and sounds worse. A shonky strumming hand is worse than no hand at all, which might sound extreme, but you just wait until Johnny Two-Chords serenades you with an hour of arrhythmic clatter.

You don't see a lot of chubby judokas. Obese boxers tend not to become world-beaters. The Karate Kid was not renowned for his girth. Don't let Kung Fu Panda fool you (although, honestly, you should see it, it's awesome): if your body isn't training, it won't do what you want it to do.

Guitarists know this problem all too well. Burning fingers unable to hold barre chords; shredded fingertips yet to develop calluses; backs bent from the weight of heavy guitars - these are the hallmarks of the under-trained guitarist.

All too often the mind is willing but the body is weak. You must train if you are to reach peak performance. We suggest an intensive course of loading cabs in and out of vans, followed by two 30-minute sessions of intense aerobic workouts three times a week (also known as 'joining a band'). Watch your waistline shrink and your mighty arms harden like seasoned oak.

In the middle of every fight scene, either the hero or the villain is distracted somehow. Boxes are thrown, babies are dangled, fingers are pointed (as per the now classic 'what's behind you?' technique). Whatever it is, the distractor makes it happen, the distractee loses focus and then proceeds to have their face vigorously stoved in.

Focus is everything, friends. And it is vital to guitarists. Sure, Slash might look like he barely realises he's playing to 20,000 people, but trust us, it's all front. Behind that hat, hair and glasses is the laser focus of a kung fu master. There will be no dropped chords or fluffed notes, not tonight, not ever.

You too must learn the ways of focus and zen-like calm if you are to scale the mountain of rock. Otherwise you run the risk of playing a wrong chord in front of a crowd of actual, live humans, and your fragile musician's ego may never recover. Lean in to the focus, child, and never be the cause of a giant balls-up ever again.

6. Invest in the correct kit

Boxers have gloves, judokas have gis, and the Teenage Mutant Ninja Turtles had matching masks and armbands. The lesson? If you want to be the best, you need the right gear.

When it comes to guitars, scrimp, save, sell your little toe to science, but for the love of Jim Marshall, buy the best you can afford. Shop around, try half-a-million instruments, haggle like your mama taught you, and make sure you're taking home something worthy of the songs you want to play on it.

Same goes for amps, pedals, plectrums - don't skimp on anything if you can help it. You don't have to spend millions, but spend more than a tenner if it is in any way achievable. No guitarist ever regretted digging a little deeper into their pockets for a guitar - trust us on this one.

Think of yourself as Daniel San in Karate Kid, practising the crane stance at all hours of the day, in weird places, on his own. You must be Daniel San. Learn to enjoy your own company (not like that, you filthmonger), put the hours in and you'll soon see the benefit.

You'd have thought this goes without saying by now, but there are a surprising amount of players who think musical talent arrives in the form of a lightning bolt from the sky, blessing a rare chosen few with God-like ability out of the blue. It doesn't. Greatness means graft, and lots of it. Muscle memory plays a huge part in playing the guitar, but that means training your muscles every single day. So hop to it.

Bruce Lee did not become Bruce Lee by punching air in his bedroom. He got out there and punched people in the head. He punched heads in street fights and competitions. He punched heads in fights on screens small and large. He punched so many heads so impeccably well that eventually his head-punching prowess made him an internationally famous martial arts legend.

There's a lesson here, guitarists: do not stay at home playing to imaginary crowds. Form bands. Find gigs. Learn impossibly difficult songs. Push yourself and you can only improve as a musician.

9. Use your powers for good

Finally, in the traditions of all great martial arts stories, you must learn to only use your hard-earned musical kung fu for good. There are temptations out there for every budding guitarists - booze, drugs, Snow Patrol cover bands - but you were made for greater things than these. Believe in yourself and your goals and go after them like a maniac. Do not stray from your path, even when it feels impossible.

Martial arts-types must have supreme confidence before a fight, or they'll lose before the first kick. Have the same self-confidence (and if you haven't got it, pretend you have it until you do). Ambition is good; hard work and self-belief are better. After all, somebody has to be this generation's Jimi. Why shouldn't it be you?

10 signs that you're a guitar gear snob